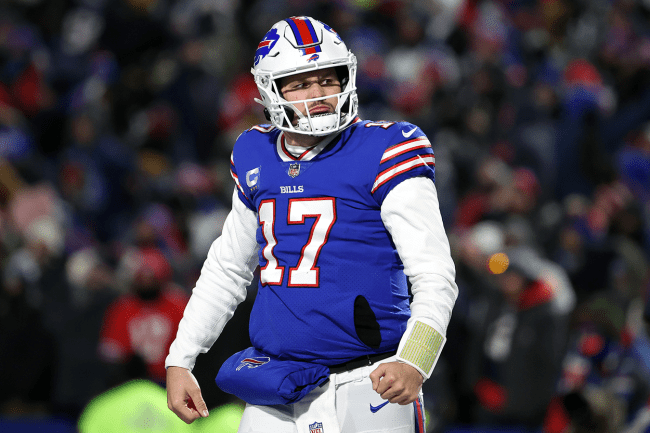 Buffalo Bills quarterback Josh Allen is coming off of back-to-back seasons with 35+ passing touchdowns and 4,500 passing yards. As the 25-year-old gears up for his fifth year in the league, he is looking bigger than ever.

Allen, who stands 6-foot-5, 235 pounds, has been in the weight room during the offseason and the results are showing. The Bills posted a photo of their franchise quarterback and Gabriel Davis at the team facility on Wednesday and while Davis looks strong, Allen looks huge.

Pictured in a cut-off shirt, the former first round pick has biceps bigger than most people’s thighs.

Do you even lift bro? 😅#GoBills | #BillsMafia pic.twitter.com/azn0ugAwb0

Of course, Allen’s arms immediately went viral and NFL fans had all kinds of things to say about his massive muscles.

He is a beast

The league is finished. pic.twitter.com/kNlGvdBC9m

Get popeye some spinach for those bazooka arms! #GoBills #BillsMafia

Just trying to picture myself as an NFL Safety, coming off my assignment because Josh has broken containment and has about a 10-yard head of steam churning, and I’m trying to decide if making a business decision or shitting my pants is the next move. Damn, Boy be Big. And Cut.

And you thought he was trucking dudes before? Kyle Van Noy just retired after seeing this

Can’t wait for the season! This dude is about to shatter records on his way to a Lombardi trophy! #GoBills #BillsMafia

Hes gonna throw it so hard a poor rookie gonna have to duck the first couple pic.twitter.com/eH0fc5dDK5

Working on the stiff arm for Aaron Donald

Considering where Allen came from, his size is rather astonishing. As a high schooler, the California-native was about 6-foot-3, 180 pounds.

By the time that he reached his senior season and recruiting cycle, he was closer to 6-foot-5, 210 pounds. Now, nearly a decade later, Allen is looking closer to 6-foot-5, 240 pounds. The dude is absolutely jacked and, considering that he has one of the strongest arms in the league already, this new offseason transformation should put the entire NFL on notice.