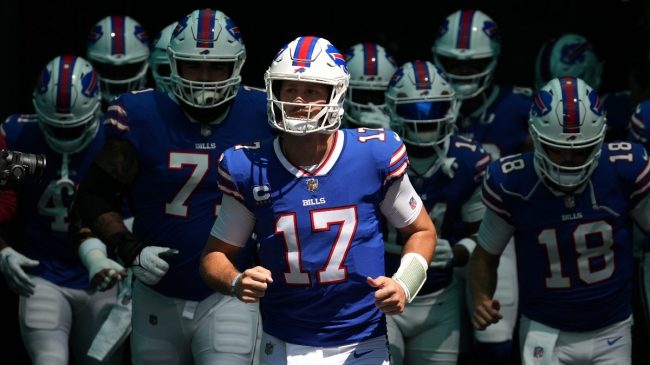 The Buffalo Bills’ offense is an absolute juggernaut as they’re on the verge of breaking an impressive record. They’re currently taking on the Miami Dolphins, which should be a fantastic AFC East showdown. However, the franchise will have a chance to make NFL history in Week 4 after Josh Allen leads his team to an early score against Miami.

That’s right. According to Matthew Bové, Buffalo has officially tied an NFL record after scoring a touchdown on the opening drive on Sunday. They’ve done it in eight straight games, making this offense one of the most efficient in NFL history. Completing this task in just one more game will give the Bills the record.

For the eighth-straight game, the Bills have scored a touchdown on their opening drive. That ties an NFL record.

Dov Kleiman shows a clip of the touchdown that tied the record. Josh Allen tossed the ball to Devin Singletary for an easy touchdown pass against the Dolphins. Considering Miami has to account for Stefon Diggs, Gabriel Davis, and Dawson Knox, it makes sense why they left Singletary wide open in the end zone.

#Bills have scored a touchdown on 8 straight drives. Unstoppable. pic.twitter.com/25qN5wHp4P

The Bills have been amazing since Josh Allen emerged as a superstar quarterback. There is no telling how good this offense can be, as they’ve been lights out so far this season. There is a reason why Buffalo is an early Super Bowl favorite, as the roster is completely stacked in every facet of the game.

Look for the Bills to keep making noise all year long. If they keep this up, then this Buffalo team has a chance to be one of the best to ever play the game.