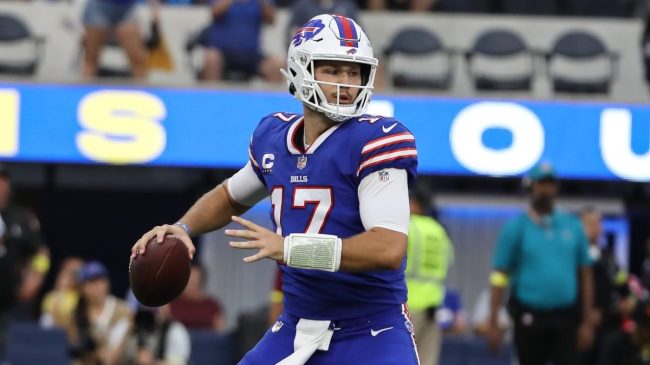 The Buffalo Bills and Miami Dolphins have been on absolute fire to begin the season. Now, these two juggernauts clash in a Week 3 matchup to see who takes an early lead in the AFC East. Josh Allen had some eye-opening comments about Tua Tagovailoa, as his defense prepares to face Miami’s offense.

During his weekly appearance on Kyle Brandt’s Basement, Josh Allen discusses what he sees in Tua Tagovailoa. Rather than talking down on his opponent, Allen seems to be a fan of the Dolphins quarterback. Considering these teams are in the same division, it’s a bit surprising to hear the Bills QB claim he’s “proud” of Tagovailoa.

(Shout out to Josh Allen for repping a Bob Does Sports hat from former BroBible podcaster Robbie Berger. We see you, Josh!)

Josh Allen is pure class though. He doesn’t come off as the type to trash his opponents. He might do some talking on the field, but that’s in the heat of the game and totally different from calling someone out publicly. Regardless, he’s truly enjoying what he sees from Tagovailoa, as the Dolphins look like one of the league’s best teams right now.

This game should be electric throughout. The Bills have been unstoppable offensively and defensively. Meanwhile, Miami’s offense hit a new stratosphere in Week 2 against the Baltimore Ravens. We should expect fireworks, as both Josh Allen and Tua Tagovailoa are in line to have monster games.

Based on how the rest of the AFC East is stacking up, the division may just come down to the wire between the Bills and Dolphins. If that’s the case, then this upcoming game should be considered one of the bigger contests of the season. Look for Josh Allen to do everything possible to route another opponent.