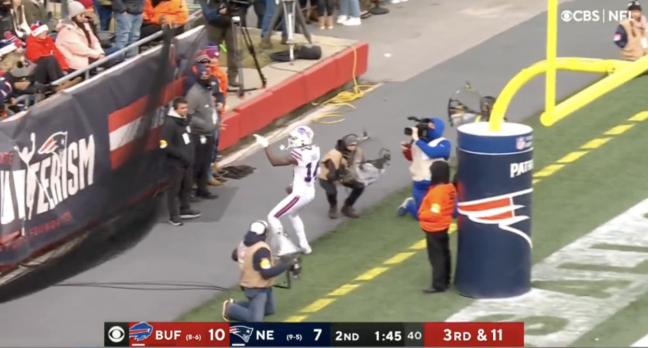 The AFC East rivalry between the Patriots and Bills has reached a fever pitch in recent years. Both teams are consistently vying for the top spot in the division and look to make a run to the playoff, and things often get chippy like they did on Sunday between a group of fans and Stefon Diggs.

Earlier this year, when the two teams squared off in Buffalo, it was a low-scoring battle. Amidst heavy, brutal wins, New England played to a 14-10 win over Buffalo by running the ball 46 times.

When the rematch took place in Foxboro on Sunday, the Patriots held a one-game lead over the Bills in the division. If Buffalo was to win, it would take over the top spot, while a New England win would offer some distance atop the AFC East.

Needless to say, tensions were high. Thus, when Diggs found the end zone in the first half, he let the opposing fans know who was in charge.

Josh Allen found his best receiver over the middle for six and took a 17-7 lead into the break. Diggs, on the receiving end, proceeded to walk over to the stands and was caught on a hot mic.

He pointed at five different Patriots fans in the front row before telling them, not-so-kindly, to be quiet.

Stefon Diggs gives Buffalo a 17-7 lead just before the half pic.twitter.com/tQ5XCw2rtu

CBS surely would have preferred that the mic did not pick up Diggs’ dig, but it did. And it was legendary.