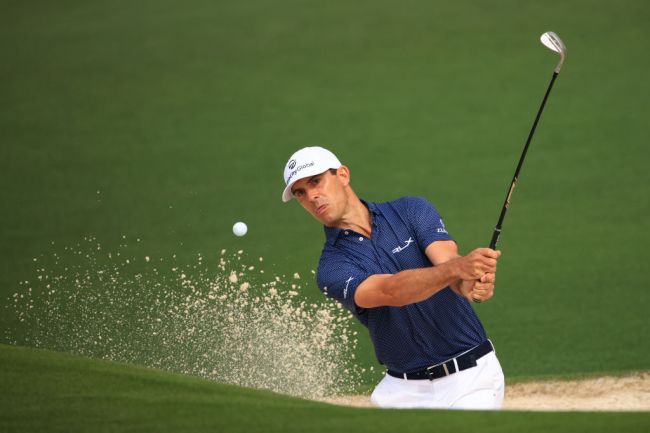 Billy Horschel may have finished in a tie for 50th at the Masters, but that’s not to say he didn’t have an eventful weekend at Augusta National.

During his final round on Sunday, the six-time PGA Tour winner had a bit of a meltdown in which he took out his frustrations on his clubs. He was caught repeatedly slamming a club into his golf bag on the Par 4 7th following a poor chip shot. While he didn’t execute the shot like he wanted to, the golf gods didn’t penalize him as he went on to make par on the hole.

This was Billy Horschel earlier in today’s round. pic.twitter.com/YOEYxYLiH8

After his final round 76 on Sunday, Horschel issued an apology on Twitter explaining that he’s a fiery player, but realized he may have crossed the line.

“I am and have always been a fiery competitor. Unfortunately, the fire inside me sometimes runs hot when I’m not getting the most out of my game,” Horschel wrote. “This leads to some instances where my conduct is not what I wish to show, especially as a role model to the younger generation.

“I apologize to Augusta National, the Members of the Club and to the patrons for any conduct that may have crossed the line. I am always trying to improve and do better; as a golfer, husband, father, or as a human being. Thank you The Masters for a memorable week!”

The seventh hole wasn’t the only one that was treated to a Horschel show over the weekend, the Par 5 13th saw quite a bit of action as well.

During Saturday’s third round, Horschel lost his footing walking down to Rae’s Creek with Phil Mickelson getting a front-row seat. He miraculously got up and down from the creek to save his par on Saturday.

Billy Horschel slips down the hill on 13. pic.twitter.com/K2Y4XWDuaa

Horschel had to roll up his pants and take his shoes off on the 13th hole again on Sunday after hooking his tee shot into the creek. This time around, the hole got the better of him as he walked away with a triple-bogey eight.

Things are moving quickly for Billy Horschel on No. 13 again today. pic.twitter.com/YL69B2iHdt

Horschel birdied the Par 5 in his opening two rounds but was 1-over on the iconic hole for the week thanks to his triple bogey on Sunday.