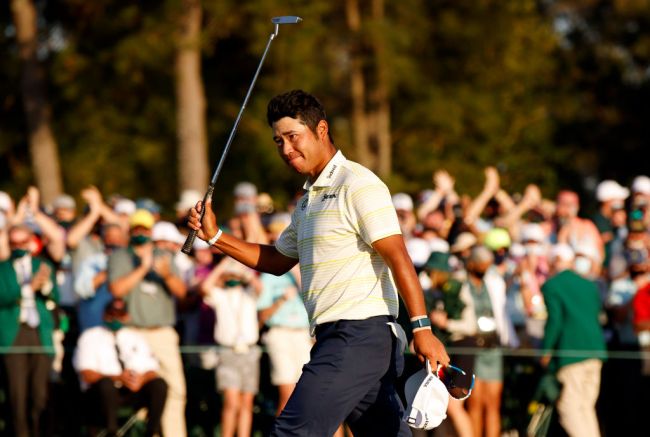 Hideki Matsuyama sent his opening tee shot into the trees well right of the first fairway to begin his final round on Sunday. It felt like his errant tee ball may be a preview of what was to come, an eventful and drama-filled final round, but Matsuyama settled in after an opening bogey and was able to do enough when adversity did settle in later in the round.

We got a drama-filled 10 minutes or so on the Par 5 15th, but Matsuyama prevailed while the man chasing him down, Xander Schauffele, wasn’t able to execute down the stretch.

Matsuyama air-mailed the green and sent his second shot into the water on the 15th before walking away with bogey. Meanwhile, Schauffele got up and down from a greenside bunker to make birdie cutting Matsuyama’s lead to just two with three holes to play.

Hideki air mails the 15th green. This isn’t over *just* yet… pic.twitter.com/1AfqBF78ui

Despite the momentum being on Schauffele’s side, he then found the water with his tee shot on the Par 3 16th and made a mess of the hole carding a triple bogey. Matsuyama dropped a shot with a bogey of his own to move to 11-under but maintained a four-shot lead over Schauffele and a two-shot advantage over Will Zalatoris who was already in the clubhouse at 9-under.

With his one-shot victory at 10-under, the golf-crazed country of Japan finally has its first major champion. Matsuyama very literally carried the weight of his home country on his shoulders on Sunday and handled that pressure and all of those expectations as well as anyone could have asked for.

Matsuyama’s win is a win for golf. As an American, I think it’s tough to wrap my head around what sort of effect this could have on the game globally, but I do know one thing, the ripple effect we could see from this could be really special for years and years to come.

Shota Hayafuji, Hideki Matsuyama’s caddie, removed his hat and took a bow after returning the pin on the 18th hole.

It’s also worth noting that Matsuyama was previously the No. 2 player in the world and has been one of the greatest ball-strikers in all of golf throughout his career. It had been the putter that’s held him back and why he hasn’t found the winner’s circle as often as some may assume he would have at this point of his career.

Matsuyama has had quite the journey and plenty of doubters that didn’t think he had the all-around game to get the job done at a major despite being so unbelievably consistent. Well, those doubts have been put to rest in the form of his new green jacket.