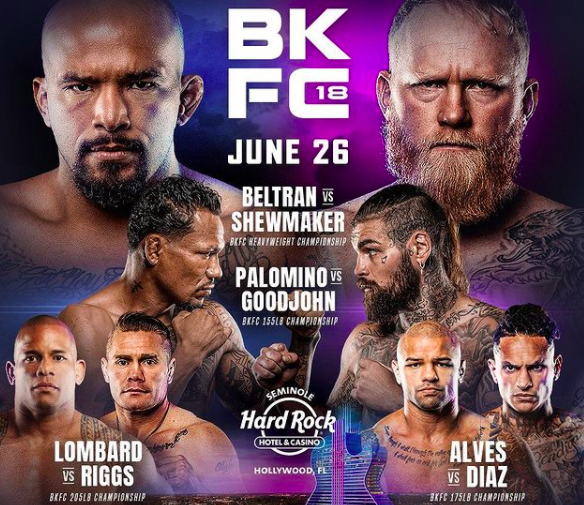 The summer’s heating up, guys — and sporting events are starting to bring back serious excitement. But the only place to really take in legit hard-hitting action that’ll have you on the edge of your seat is with Bare Knuckle Fighting’s BKFC 18, which has a tasty event coming up on June 26th from the Hard Rock Hotel & Casino in Hollywood, FL.

There’s a bunch of big-name fighters scheduled at BKFC 18 — with the Luis Palomino-Tyler Goodjohn presenting one of the most intriguing matchups — so now’s the time to pre-order the event.

How to watch the BKFC 18 live stream

With the BKFC 18 live stream only available on Bare Knuckle TV — a multi-device subscription-based streaming platform bringing LIVE bare-knuckle fighting and the most complete library of Bare Knuckle Fighting known to man — this is your chance to experience the intensity of each fight. Just look at all the access you get when you sign up for Bare Knuckle TV for just $3.99/month.

There’s no denying this is as pure as it gets, with fighters scrapping it out as if they were in a street fight. And the only place for the live stream is on Bare Knuckle TV.

While most fans are most enthusiastic about the bout between Luis Palomino and Tyler Goodjohn, BKFC 18 has plenty of other matchups that are just as exciting. Take a look at the slate below.

With the live stream only available on Bare Knuckle TV, there’s nowhere else to catch the hard-hitting, intense action. And if you can’t be at the Hard Rock Hotel & Casino in Hollywood, FL to witness the event in person, the price of the event on Bare Knuckle TV costs just $3.99/month — which includes tons of access to the best from the BKFC.

The summer’s sure to deliver some memorable sports moments from around the globe, and you can bet that there’s going to be all sorts of excitement from BKFC 18. So don’t miss out on the intriguing event and make sure to sign up for Bare Knuckle TV — the online place for the live stream.

Some sporting events are OK to miss. But BKFC 18 is definitely not one of those things.