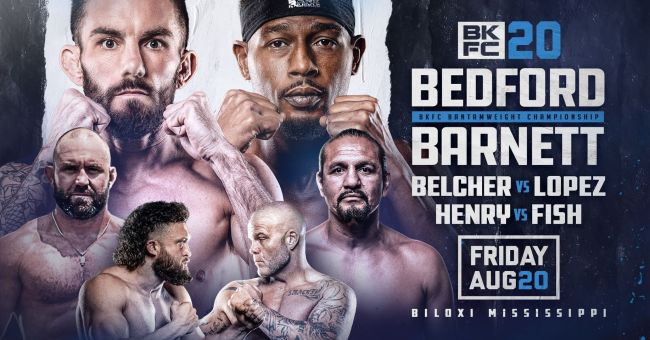 It’s a great time to be a sports fan with so many athletic events happening across the world. But if you’re looking for some hard-hitting action that’s on a different level, look no further than BKFC 20, which is streaming tonight, August 20th from Biloxi, Mississippi.

What’s so exciting about BKFC 20? If you missed BKFC 19, featuring a bout with the rapper Blueface, it’s some of the most intense fighting in the world. It’s the only sanctioned bare-knuckle fighting organization out there.

How to watch the BKFC 20 live stream

BARE KNUCKLE TV is now the only way to watch the Bare Knuckle Fighting Championship in the United States. And just for $4.99/month, you can watch the BKFC 20 stream and more BKFC exclusive content. The fight starts tonight at 8 PM ET/ 5 PM PT.

Bedford and Barnett first met in BKFC 6 with Bedford coming out on top. Tonight’s event however will be for the vacant title, which was stripped from Dat Nguyen after refusing to face Barnett. Bedford will look to reclaim the title, having lost it to Nguyen earlier this year. Another fight to keep your eye on is the heavyweight bout between Quentin ‘The Hero’ Henry and Jason ‘J Hook’em’ Fish.

How Much Does BKFC 20 Cost?

With the live stream only available on BARE KNUCKLE TV, there’s nowhere else to catch the hard-hitting, intense action.

The sports calendar is filling up, so you’ll want to make sure you don’t miss the last, wildest event of the summer, BKFC 20, which delivers the hardest hitting action. So make sure you subscribe to BARE KNUCKLE TV and get the BKFC 20 live stream up now.