#Affiliate Partner
BroBible may earn a commission if you buy a product or service via links in this article.
by Tom ConroySeptember 30, 2022 12:22 pm 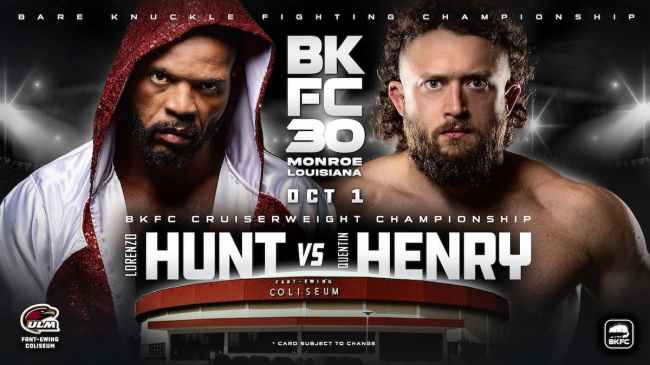 Forget about football. Forget about baseball. Forget about all of your normal sporting events. If you’re looking for something to watch that packs more of a punch, look no further than the BKFC 30 stream – live on Saturday, October 1 from Monroe, Louisiana.

What’s so exciting about BKFC? It’s the only sanctioned bare-knuckle fighting organization out there, featuring some of the biggest names in combat sports.

This card for the BKFC 30 stream is headlined by current BKFC light heavyweight champ Lorenzo “The Juggernaut” Hunt (7-1-0) taking on Quentin “The Hero” Henry (5-1-0) for the vacant cruiserweight belt. The action continues with a heavyweight slugfest in the co-main event as former UFC standout Ben Rothwell makes his BKFC debut against “The Bible Belt Brawler” Bobo O’Bannon (3-3-0).

BKFC 30 Stream – How To Watch Online

Bare Knuckle Fighting Championship (BKFC) is the first legally sanctioned and regulated bare knuckle event in the U.S. since 1889, so, yeah, it’s as no-holds-barred as it gets. Dedicated to preserving the legacy of bare knuckle fighting, bouts are held in a revolutionary circular four-rope ring, which is purposely designed for fast-paced and exciting fights. Moreover, each bout begins as fighters “Toe the Line” — which means starting every round face-to-face and just inches apart — the intensity is as high tense as it gets.

Fighters in BKFC are established pros from sports like boxing, MMA, kickboxing, and Muay Thai, and are the only athletes able to compete. Additionally, each competitor is only allowed to wrap their hands within one inch of the knuckle, so fights are as bare-knuckle as it gets.

The only place to watch BKFC 30 online? Bareknuckle TV, the official BKFC app, where you can stream every single BKFC event for only $4.99 a month.

How Much Does BKFC 30 Cost?

$4.99 a month or $49.99 a year. With the live stream only available on BARE KNUCKLE TV, there’s nowhere else to catch the hard-hitting action.

The sports calendar is filling up, so you’ll want to make sure you don’t miss one of the best fight nights of the season. So make sure you subscribe to BARE KNUCKLE TV and get the BKFC 30 live stream up now.