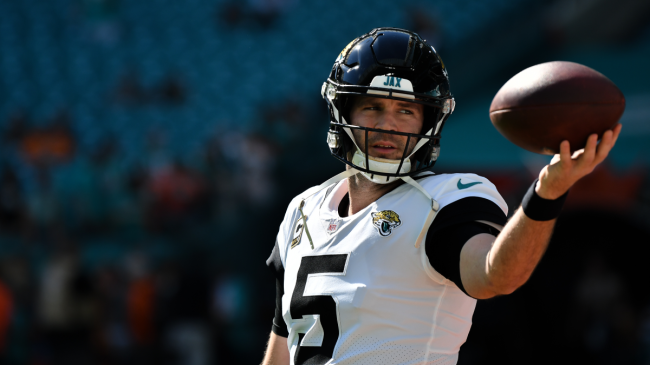 Blake Bortles publicly announced his retirement from the NFL on Wednesday, officially ending a six-year career. Bortles was the third overall pick in the 2014 draft, spending the majority of his time in Jacksonville. The quarterback also had a short stint in Los Angeles, as well as time on the practice squads in Green Bay, New Orleans, and Denver.

Bortles is best remembered for his 2017 playoff run. After leading the Jaguars to 10 wins, he racked up postseason victories over the Steelers and Bills before falling in the AFC Championship, 24-20, to the Patriots.

For his career, the passer totaled 17,649 yards and 103 touchdowns. He also threw 75 picks over 78 games. Bortles is the ultimate anomaly. He’d make a fantastic play followed by an unthinkable error.

Take his 2015 season, for example. He threw for a career-high 4,428 yards, led the league in game-winning drives, and had the longest pass of the season. He also led the NFL in interceptions and sacks.

And in that 2017 campaign, he looked mediocre on the field before exploding for that remarkable playoff run.

Bortles still holds multiple franchise record in Jacksonville, and honestly, the Jaguars haven’t been relevant since he left. For that reason, many were sad to see his announcement.

Bortles made his retirement announcement on the Pardon My Take podcast, and it’s caused quite the reaction on social media.

“I quietly retired. I just didn’t tell anyone. I guess you guys are the first to hear it, publicly.”

Fans are remembering his time in the NFL, as well as the stories that came along with it.

For example, there’s the time he intercepted a would-be burglar and made a citizen’s arrest until police arrived. Or when he fed first responders after a deadly shooting in Jacksonville.

Many remember the hilarious clip of him saying he’d be “working construction, ripping cigs” if he wasn’t an NFL star. Maybe he’ll finally get a chance to live out his dream.

Congratulations to Blake Bortles on announcing his retirement from playing football, now he can work construction and rip cigs https://t.co/1QEkm48tBG

A few others posted some of their favorite quotes/memories from Bortles throughout his playing days.

A great day to remember possibly my favorite quote during my time covering the Jaguars. Long live Blake Bortles. https://t.co/zRlNXq2DvV

What is your favorite Blake Bortles moment? On or off the field.

I’ll go first: 2017 Jags-Steelers divisional rd of playoffs.. the camera pans over to Blake on the sidelines trying to make fog smoke rings with his breath like the true Floridian he is

In honor of Blake Bortles officially retiring, we bring you his best mic’d up moment 🔊 pic.twitter.com/eDD6II3qIq

Others posted his terrific playoff numbers, some of which even best the GOAT, Tom Brady.

Blake Bortles has a higher career passer rating in the playoffs than Tom Brady.

Congrats to the BOAT on a great career! #DUUUVAL pic.twitter.com/7gsNSIVcl4

Blake Bortles has won a playoff game in Pittsburgh more recently than the Pittsburgh Steelers have.

This fan summed up Bortles’ career perfectly by saying, “I don’t know if there is a more fascinating player in Jaguars franchise history than Blake Bortles – when it comes to performance vs. fan respect/affinity vs. place in team history with 2017 season. It’s an odd, yet cool relationship between Blake and the fan base.”

I don't know if there is a more fascinating player in Jaguars franchise history than Blake Bortles – when it comes to performance vs. fan respect/affinity vs. place in team history with 2017 season. It's an odd, yet cool relationship between Blake and the fan base.

What will we think of the quarterback’s career 50 years down the line? It’s safe to say that there will be many different interpretations of his time in the league.

80 year old me telling my grandkids about the legend of blake bortles 😢 enjoy retirement, king. forever the ⛵️pic.twitter.com/gixVRJDD1s

And with that, we say our final farewells.

The NFL lost a legend today.