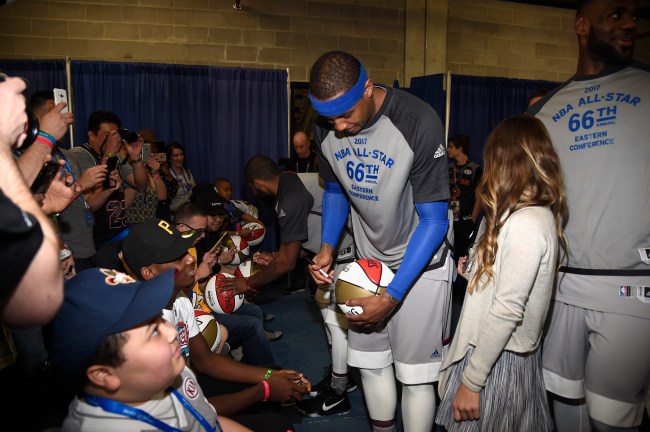 For anyone who ever told their dad they had to get to the stadium two hours before tipoff to maximize autograph capability, this video is going to hit you right in the feels. It might be bad feels, too, because there was NOTHING worse than being the kid standing next to the kid who got the autograph. Autograph fomo is antibiotic resistant; it’s one of the strongest strains of fomo going. Worse than finding out your crush was at the party you didn’t get invited to. Worse than watching your closest friends light themselves on fire at a nightclub while you’re studying for the GMAT.

But if you’ve grown at all as a person since those autograph-chasing formative years, this video will make you breathe a sigh of relief, of second-hand happiness for this dude. Because make no mistake—this guy is at least 25. He’s still in the game. He knows the angles. He knew the exit Melo would be taking. He hung the jersey over the edge with the back facing out and uncapped his sharpie twenty steps before the star was there—not too much time to let the marker dry out. He played it by the book and walked away with the ink. Perfection.

I bet Carmelo signs more these days. Ten years ago, there’s no chance he stops to sign. Guys like that can’t really afford to; too many mouths to feed, so to speak. But now, in these glorious twilight games, where he seems to be playing for joy? Sure, he’ll stop and sign. Especially if it’s his jersey you’re holding.

I sure hope this kid didn’t sell this thing on eBay. But from that look on his face, I feel confident that he got this thing framed and is staring at it on his bedroom wall right now. At least for another year or two, until his startup bombs and he has to sell it. But until then, that signed jersey is evidence of a perfectly-executed autograph hunt. Well done, young man.

Melo signing your jersey. Doesn’t get much better than that 🔥