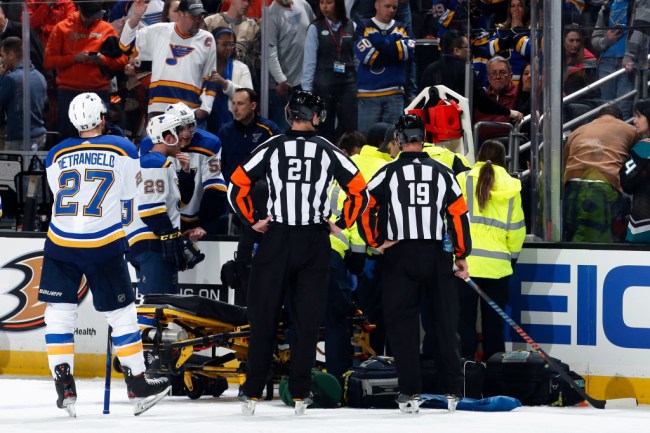 During the Blues matchup with the Ducks on Tuesday night, a rather scary scene unfolded in Anaheim. With 7:50 left in the first period, St. Louis defenseman Jay Bouwmeester collapsed on the bench and was stretchered off the ice after suffering a cardiac episode.

Following the incident, the Blues did announce that he is conscious and alert after undergoing further testing by the Ducks’ physicians, according to ESPN.

Bouwmeester, 36, had completed a 1-minute, 20-second shift and did not appear to have absorbed any big hits or contact to his head. He appeared to be grabbing a drink of water when he began to fall.

Teammate Vince Dunn began shouting and waving for trainers to assist. Bouwmeester was taken off the bench as the game was delayed.

“Thankfully, with the quick response of our medical trainers, Anaheim medical trainers and their team physicians, they were able to stabilize Jay,” Blues general manager Doug Armstrong said in a statement, adding that Bouwmeester was “conscious and alert” as he underwent further testing by Anaheim’s physicians Tuesday night.

The video of Bouwmeester collapsing on the bench is scary. He’s leaned over for a split second then just falls to the floor.

Jay Bouwmeester collapses on the Blues bench. Game has been delayed pic.twitter.com/wOJkAFANCT

The Ducks and Blues decided to postpone the game, which will be made up at some later date.

Bouwmeester has one goal and eight assists in 56 games played this season for the Western Conference-leading Blues.