Bo Nix Brought An Awesome Gift To His Oregon Teammates 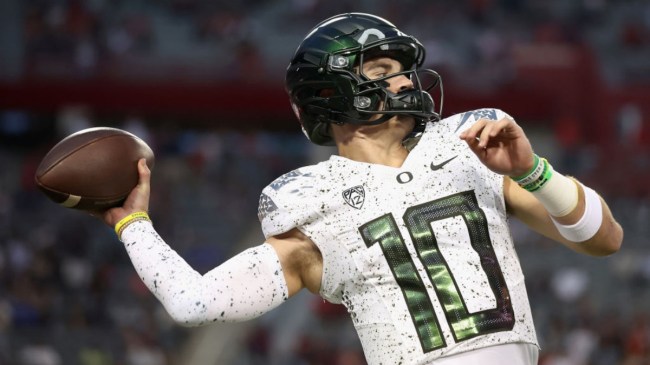 Since the advent of NIL, college quarterbacks have made a habit of giving their team gifts. We’ve already seen CJ Stroud gift his teammates some Beats this year.

Now, Oregon’s Bo Nix has followed suit and given his teammates an awesome gift.

Nix is in his first year with the Oregon Ducks, transferring from Auburn after 3 seasons in Alabama. Earlier this year, Nix was asked if there was anything he missed after moving from the South. He named only one thing. The new Ducks quarterback was missing Chick-fil-A.

This week, he did something about that. A video surfaced showing Nix handing out some chicken at Oregon.

The Ducks have had plenty to celebrate in recent weeks. After getting demolished by Georgia in a game that had many ridiculing Nix, Oregon has bounced back in a big way.

Oregon has won 5 consecutive games, including a dominant win over BYU. That success has given them plenty of reason to celebrate with some Chik-fil-A. It also has them currently ranked 10th in the country, making them the 2nd highest ranked team in the PAC-12.

They’ll take on the highest ranked team in the conference this weekend when they welcome UCLA to Eugene. If they win that one, fans may be ready to build him a Chik-fil-A on campus.

Nix is in the midst of the best season of his career, throwing for 1526 yards and 12 touchdowns. He’s also only thrown 1 interception in the 5 games since the loss to Georgia.

Oregon will need to hope this mid-week treat keeps their team playing at a high level as they’ll have to be at their absolute best to be the first team to beat UCLA.