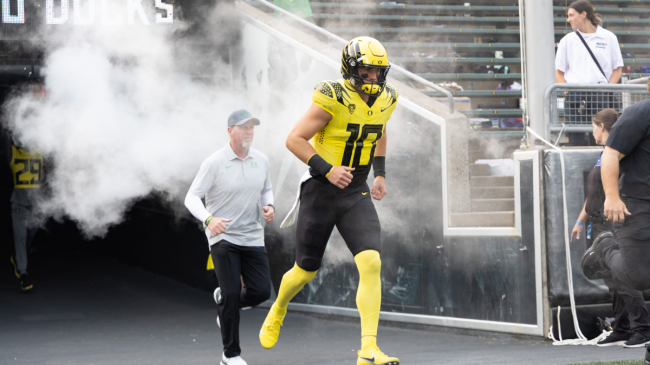 Bo Nix spent his first three college seasons in the SEC at Auburn, where he led the Tigers to 21 wins and a trio of bowl appearances. He opted to head out West for his final hoorah, though, signing with the Oregon Ducks this past offseason.

Through three games in Eugene, he has his team sitting at 2-1, rebounding nicely from a deflating loss against Georgia in the season opener.

At Oregon, he’ll have a chance to do something he couldn’t at Auburn. Win a conference championship.

With the Tigers, he had to deal with playing Alabama, Georgia, Texas A&M, and LSU on a yearly basis. He was never able to make a trip to Atlanta for the SEC title game, but with the Ducks, he just might win his league.

Oregon begins PAC 12 play this weekend with a trip to Washington State, riding high off a three-score win against 12th-ranked BYU. But while I’m sure he’s excited about beginning conference play, there is something he misses about playing in the SEC.

Bo Nix took to the media as his team prepares for the PAC 12 opener, but he revealed something he misses about playing in the Southeast, and that’s Chick-fil-a.

Look at what the quarterback had to say in his most recent press conference.

“I’ll tell you what I miss — Chick-fil-A. They don’t have that in Eugene. Thank goodness for Chipotle.”

And most everyone from the Southeast would agree. Chick-fil-a is a delicacy in most southern states. It almost shouldn’t be considered fast food.

Hopefully, he was able to get his fix when the Ducks played in Atlanta Week 1. The Ducks likely won’t get back that way unless bowl season calls them to the East Coast.

At least he has Chipotle to hold him over for the rest of the year.