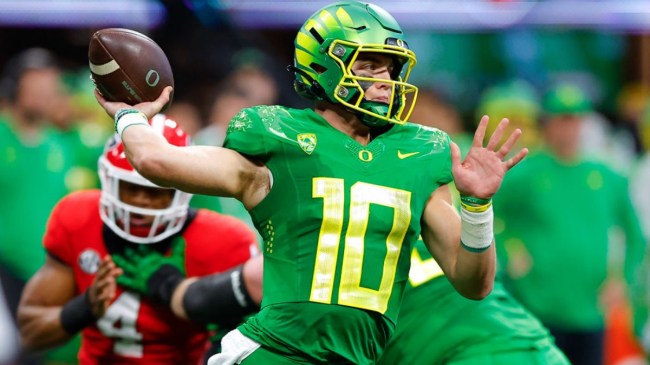 When Bo Nix transferred to Oregon for the 2022 season, it was supposed to be a fresh start for the quarterback after a few up and down years at Auburn. That hasn’t been the case through the first half of his Oregon career.

We’ve seen more of the same from Nix through the first 30 minutes of his Oregon career.

Nix ran into a familiar foe for his first Oregon start, heading to Atlanta to take on the Georgia Bulldogs and their stifling defense.

Oregon's new quarterback is familiar with the Georgia Bulldogs.

After 1 half of football, Nix has completed 16 of 24 passes for 142 yards and a pair of interceptions. One of those interceptions was a easy pick that he threw into triple coverage over the middle of the field.

Nix has been completely outplayed by Georgia quarterback Stetson Bennett, en route to a 28-3 halftime deficit and he has been getting crushed for the performance.

Bo Nix getting crushed for brutal first half against Georgia

Bo Nix is the meme that never fails pic.twitter.com/OOpljZQiua

One account chimed in, “Bo Nix really moved 40 hours away just to get destroyed by Georgia’s defense but wearing green.”

One fan isn’t sure Oregon will even let Nix into their facilities on Monday.

Bo Nix showing up for practice on Monday pic.twitter.com/X0CapH5Qcr