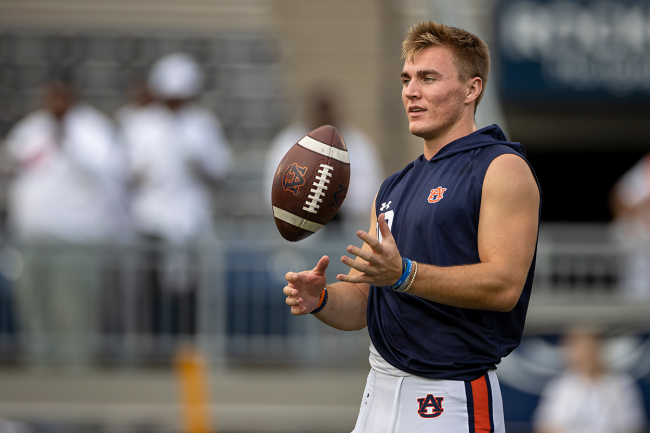 Although former Auburn quarterback Bo Nix is no longer in the SEC after transferring to Oregon during the offseason, that didn’t stop him from cashing-in while he was there. He was QB1 at one of the most prominent, high-profile programs in the nation, which brought his market value to a large number.

Specifically, according to a founder of an NIL agency who spoke with David Hale, Nix made a lot of money through media.

Chatted today with the founder of an NIL agency, who shared a pretty interesting story about his early experience in the marketplace that may perhaps dovetail with Nick Saban’s ire… a quick 🧵
(1/x)

According to the founder, he was hired by a media company in August of 2021 to recruit SEC football players for a weekly appearance on a podcast network. The media company was offering $500 per week for 15-minute appearances.

Among the SEC football players who the founder got on board with the paid media opportunity was Nix. He made weekly appearances and made somewhere in the ballpark of $8,500 for the semester at about $550 per week.

Let’s assume that Nix made $8,000 during the semester at $500 per week, for 15-minute appearances. By that math, Nix made approximately $33.33 per minute through his Name, Image and Likeness deal with this one singular media company in fall of 2021.

It is also possible that Bo Nix had multiple NIL deals of similar nature.

In addition, the NIL agency founder told David Hale that he also reached out to a few Texas A&M players who were reportedly uninterested.

“That's when the light bulb went off in my head that this is going to change very quickly, bc if kids are getting paid $50-$100K to do radio spots on some radio station in College Station, that's a joke, right? They weren't interested because their market is $5,000.”
(5/x)

That, of course, raises a few questions.

He was optimistic that the NIL marketplace would be a net positive longterm, but he thinks the market is just not tethered to any reality at this point and, in the next couple years, the well in many places will start to dry up when the ROI isn’t there. (7/x)

Name, Image and Likeness continues to be the Wild, Wild West. Buckle up!