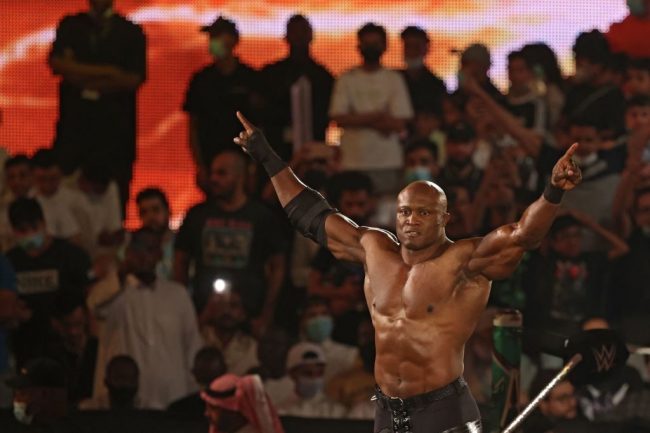 When Brock Lesnar made the move from the WWE to MMA, it was huge news in the sports world. We had never seen such a huge pro wrestling star make this move before. After Lesnar joined the UFC, it became a lot more common for athletes to crossover between the two sports.

We’ve recently seen Matt Riddle and Ronda Rousey make the move to pro wrestling. CM Punk has fought twice for the UFC. Jake Hager is 4 fights into a career with Bellator. Before any of them, there was one other big name who made the move to MMA.

While Lesnar was reigning over the UFC’s heavyweight division, Bobby Lashley was trying to accomplish the same in Strikeforce. The two men are scheduled to meet this weekend at the WWE’s Royal Rumble. Ahead of the match, Bobby Lashley made a bold statement about their MMA skills.

This is a pretty bold claim from Bobby Lashley. It took 4 fights for Brock Lesnar to claim the UFC heavyweight belt by finishing UFC legend, Randy Couture. In his 6th fight, he defended that belt for the second time.

In Lashley’s 6th fight, he was stopped by Chad Griggs, who went 0-2 when he joined the UFC. In his 9th fight, he lost to a 17-14 James Thompson. Brock Lesnar’s losses came to 2 UFC champions and a Striforce champion.

Bobby Lashley’s MMA career was characterized by extremely stiff striking and strong wrestling. It was a similar skillset to what we saw from Lesnar, but there was one huge difference.

Brock Lesnar made his skillset work against some of the best heavyweights in the world. Bobby Lashley never fought anybody close to that category.

It’s not quite the same as seeing the two step into the Octagon, but they will get the chance to settle their business to some extent this weekend.