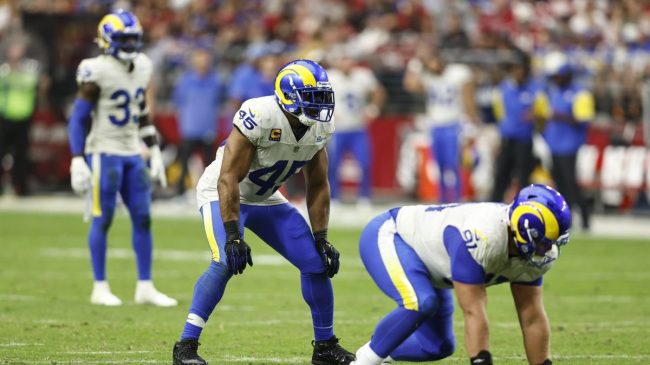 Eight-time Pro Bowler Bobby Wagner seems to be settling in nicely with the Los Angeles Rams. Wagner joined his hometown team after being released following 10 seasons with the Seattle Seahawks.

Wagner has acclimated quickly, racking up 23 tackles for the Rams over the first three weeks of the 2022 season. But none of those tackles were as impressive as the hit he laid on an over-excited fan on Monday night.,

The Rams were in San Francisco for an NFC West showdown with the 49ers when a fan sprinted onto the field late in the second quarter. Wagner, apparently, didn’t feel like waiting around for security to wrangle the fan. Instead, the 6-foot, 242-pound future Hall of Famer laid out the fan with an absolutely vicious hit.

OMG BOBBY WAGNER JUST TRUCKED THE FAN THAT RAN ON THE FIELD pic.twitter.com/uwoEzkrFxc

Peyton and Eli Manning both absolutely loved Wagner’s big hit on the ManningCast. Peyton, especially, seemed to endorse the method.

No matter, the fan will be good to go in a few days.

Bobby Wagner knocked this dude out, but the Dolphins have already cleared him to streak in the second half.

The stunt appeared to be part of a gender reveal that took a sharp turn in a hurry.

😂 this a wild gender reveal https://t.co/4MmUJVj8lj

Hopefully, Wagner’s big hit serves as a deterrent to any future fans who think running on an NFL field is a good idea.

TV doesn’t show these but man show this one no one will ever run on a field again. https://t.co/llJSfET27i

But history tells us that’s probably not the case.