Teams Are Reportedly ‘Wary’ Of Signing Kyrie Irving After Toxic, Disappointing Season With The Celtics 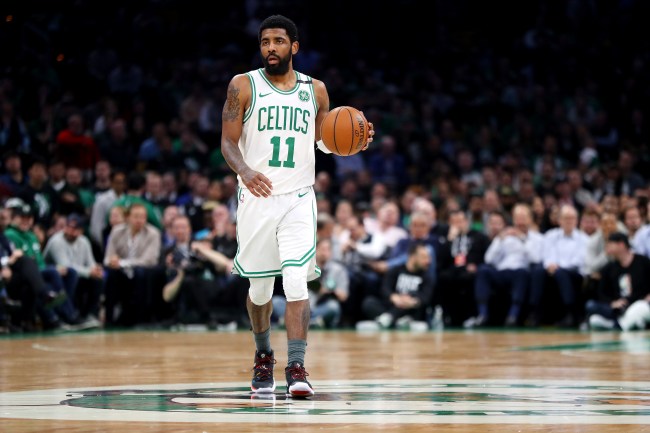 Kyrie Irving is a free agent but it seems like his stock taken a big hit after a disappointing season with the Celtics.

According to several reports Kyrie’s attitude and play-style turned off plenty of his teammates and they can’t wait for him to leave Boston.

Here’s Jalen Rose on ‘Get Up’ talking about how Kyrie’s teammates would “help him pack” in the offseason.

“They used to be a pace-and-space team, where the ball and the moment dictated who got the shot,” said Rose. “Kyrie Irving is a ball-dominant, isolation type of player. They used to be a team where Al Horford, their center, led them in assists. Okay, that was their style. Now, they’ve chosen to give the ball to Kyrie to take them home. He’s shown that he can’t be the best player on a contending team.”

Now there are reports floating around that teams are wary of signing Irving because of the Celtics disastrous season.

The most interesting bit of information from several sources that we’ve been able to consolidate and confirm is that some teams thought to have interest in Irving as a free agent are now a great deal more wary. Based on the way things played out with the Celtics this season and Irving’s role both off the court all year and on it in the playoff loss to Milwaukee, certain clubs are concerned about putting too many eggs in his basket right away.

Two teams for certain are telling people they will only go after him if they land another marquee free agent and that player says he wants Irving. In each of these cases, the initial target is different. (There was worry on one of those clubs that the basketball ops people might be overruled by ownership and told to make Irving a primary aim, but that organization is now on the same page.)

Kyrie is apparently being pushed to go to the Nets next season by his advisers but we’re not sure if the Nets even want him at this point.

Would this be a good fit for Kyrie?…And for the Nets? 🤔 🤔 🤔 pic.twitter.com/vssNHOX9dG

There’s no doubt that Kyrie is one of the top players in the league but I could see teams passing on him because of his difficulty getting along with other players and coaches on the team.