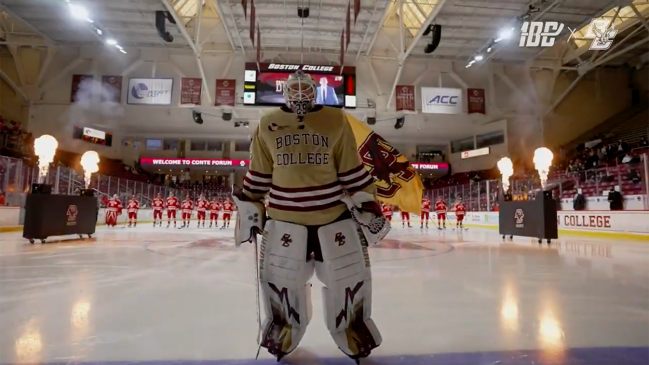 Of all the rivalries in college sports, there is one in particular that flies under the radar. Up there with Michigan/Ohio State, USC/UCLA, and Duke/UNC is Boston College/Boston University.

Although B.C. and B.U. don’t play each other in football, when they get together on the ice, things are sure to get chippy. Located less than 15 minutes from one another, the bad blood between the Eagles and Terriers runs deep.

Both men’s hockey programs are typically ranked in the Top 25, but when the rivalry is on, the rankings don’t matter. It’s bigger than just a game.

Over the weekend, the two schools met for the second and third time of the season. The first meeting was a tie, so either school had a chance to take the series with two wins on both Saturday and Sunday.

During what could have been the rubber match between the two, Eagles goalie Eric Dop had 42 saves to secure the win. It was an insane performance.

Prior to the match, Boston College creative video producer Joey Mizutani had himself a 42-save-caliber performance on the camera. He took the ice with Dop during pregame introductions and filmed a shot that should be considered for ‘Best Picture’ at the Oscars.

Take a look at the cinematic greatness:

How ‘bout this guy with a season-high 4️⃣2️⃣ saves

Mizutani, with blades on his feet, followed Dop out of the tunnel and out to the blue line, keeping his Sony A7SIII camera and Zeiss 18mm lens at the perfect angle to capture the perfect shot.

Here is a look at how he got it:

The Shooter 🤡 The Shot 🔥 pic.twitter.com/gBs3dtwoXz

And the Academy Award goes to…