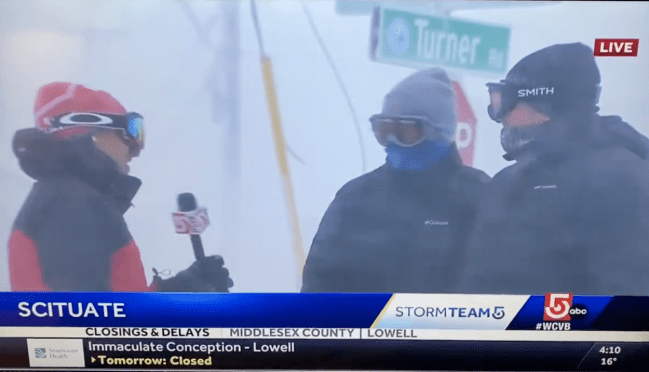 Bostonians are simply a different breed. There is no one else on planet earth like the people of Boston, Massachusetts.

Over the weekend, a ferocious nor’easter intensified into a bomb cyclone, rolled through New England and left a lot of snow in its path. In some parts of the area, up to 30 inches of snow piled up and shut everything down.

The wicked snowfall closed businesses and kept most people off of the roads. Not these two.

On Saturday afternoon, two Bostonian men were braving the elements and out for a stroll. WCVB-TV, the ABC affiliate ended up catching the most Boston interview of all-time.

As the snow was falling at a rapid pace, reports began to surface that Tom Brady is set to retire. The former Patriots quarterback meant a lot to the New England region and will go down in history as the greatest of all-time.

WCVB’s street reporter was out on the streets covering both the weather and the news out of the NFL. He stopped the two men to ask them a few questions about Brady.

As the interview came to a close, the reporter asked where the two men were going. They were, unsurprisingly, off to find an open Dunkin’ Donuts. They were unsuccessful.

Take a look at the interview and wait for the kicker at the end, it’s perfect:

This is the most Boston interview to ever appear on local TV pic.twitter.com/xgBCPL7t2d

The whole thing is hilarious, but the fact that the snow is just coming down makes the entire exchange just that much better.