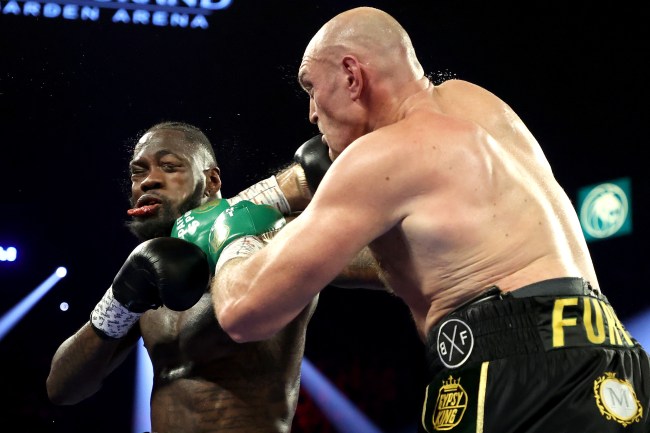 In a video posted on social media, Wilder accused Fury of illegally loading his gloves for their rematch in February and claims the gloves created “a dent” in his head and caused his ear to bleed.

🤴🏿Fury Be A Man 🖕🏿@Tyson_Fury it is time for you to be a man and honor your agreement.
What is this bullshit of you fighting Carlos Takam instead of me, you got to be kidding… pic.twitter.com/qeo47CfHi4

In the first Ricky Hatton was pulling down your gloves to put them in the improper position. Ya’ll tried the method the second time, but this time you scratched flesh out of my ear which caused my ear to bleed. It’s impossible for a 10 ounce glove to keep a smushed-in form or to have loose space. I have to believe that you put something hard in your glove…. something the size and the shape of an egg weight. It’s the reason why the side of my face swelled up in an egg weight form and it left a dent in my face as well,”

Wilder was angry Fury decided to move on from a third fight against him and will instead fight in December in a tune-up fight before attempting to take on Anthony Joshua next year.

When that fight was a draw, I told you that I would give you a rematch. You know I was offered more money to fight Joshua than I was getting to fight you. Again being a man of my word, I fought you
like I said I would…

In the rematch agreement, there was a rematch clause. Now it is time for you to be a man and honor your word, instead of trying to weasel out of our agreement. Scared people run but a scary man will break his contract you coward Azz B**čh!#BombZquad#TilThisDay

Back in July, Fury responded to Wilder’s team conspiracy theory over “loaded gloves”

“This is just a quick video to address all this foul play talk from Wilder and his team. I’ve just read an article before saying that I might’ve had some blunt objects in my gloves, yeah, two big 19 stone 7, 275lbs destroyers in each glove.

So yeah, getting punched up the temple may do that to ya. Not unless Wilder’s one trainer Jay Deas was in on the conspiracy as well, along with the Las Vegas State Commission guys who never left the room.”