Cleveland OF Bradley Zimmer Hit A Home Run Off His Older Brother, Had Confused Feelings Afterwards 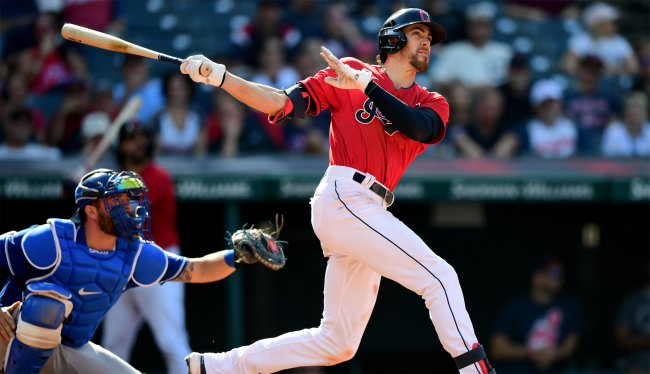 Back on July 10, Kansas City Royals relief pitcher Kyle Zimmer struck out his younger brother, Cleveland Indians center fielder Bradley Zimmer, during the seventh inning of a game between the two teams.

But as they say, payback, she is a bitch.

A perfect example of this took place Monday night in Cleveland when Bradley Zimmer, facing Kyle for the second time in their big league careers, with a 1-1 count in the eighth inning, smoked a no doubt home run off his bro deep into the right field seats.

Quite a turnaround for Bradley Zimmer, and one he’s probably dreamed about ever since Kyle sent him packing back in July.

Back then, when Kyle Zimmer struck out Bradley, he said after the game, “The matchup itself is awesome. It’s something we dreamed about our entire life.”

Kyle, who was drafted by the Royals with the fifth overall pick in the 2012 MLB Draft, also added that in their one other previous meeting in professional baseball, while in the minors, he gave Bradley “a cookie” because he “wanted to get his confidence up,” setting him up for a later strikeout.

“That was the plan,” said Kyle. “Executed it the way we wanted to. Going down 1-0 in the books against him, that’s what really matters.”

Is it though? Is it really? Bradley doesn’t sound quite so sure.

After his home run off of Kyle, who now sports a dismal 5.36 ERA in 81 games for the Royals, Bradley Zimmer told the media, “I’d say it’s a mix of emotions. I don’t necessarily pride myself just because I hit that off of my brother. Hopefully, someday, we’ll be on the same team. I’d like to be on the same team. It was fun. It was a little, I guess, redemption. He got me the first time, so I had to make it even.”

Regardless of what happens with each of their MLB careers (Bradley, drafted by the Royals with the 21st overall pick in the 2014 draft, is batting .226 after playing in 258 games over five seasons for Cleveland), the brothers have already each beaten the odds and now have a couple of memories that their families’ will enjoy for the rest of their lives.

Plus, baseball fans absolutely loved it, so there’s that too.

I wonder how many times this has happened in the back yard wiffle ball games? Lol.

And no chirping? Cmon, it would’ve been funny to get a little bit of back and forth since they’re brothers

Thanksgiving dinner will be a lot of fun at the Zimmer household.

Got to pimp the HR more if you mash your brother's pitch.

Bradley Zimmer just took Kyle Zimmer deep, and as much as Kyle is going to want that pitch back, that's just so damn cool two brothers can face each other at this level like that.