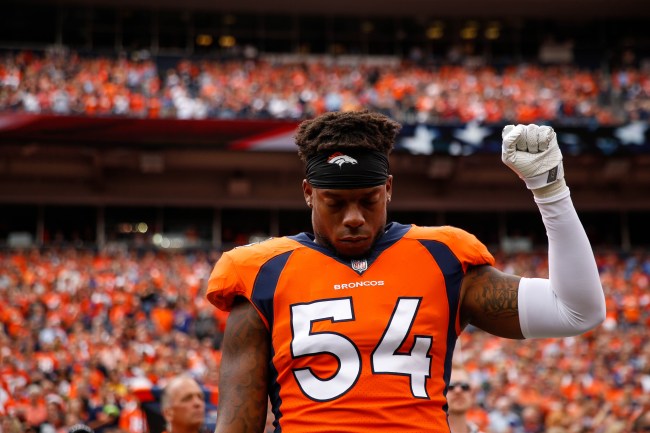 Brandon Marshall is a tough man. The 28-year-old linebacker has endured playing through multiple injuries during his five-year NFL career–namely when he played the 2015 season with broken screws in his foot from a Lis franc injury he suffered in December 2014. Marshall opted out of surgery and instead chose to remove the screws during the season and play through the pain.

The Super Bowl 50 winning linebacker also suffered a permanent injury when he made one of the most memorable plays of the 2015 season and one of the best plays of his career. With 36 seconds left in the fourth quarter in Week 2 against the Chiefs and the game knotted up at 24, Marshall poked the ball out of Jamaal Charles hands forcing a fumble. Bradley Roby recovered the loose football and returned it for the unlikely game-winning touchdown that would be critical in the AFC West race.

That glorious play will stay with Marshall for the rest of life, especially every time he looks at his right index finger. Marshall underwent surgery to repair the finger that had jammed intensely against the ball, causing the fumble, but his finger will forever be mangled.

Check out Marshall’s Instagram below. It’s one of them flip through ones, but I suggest not looking at the third post while you’re eating.

GOO! That finger has more curves than Nicki Minaj.