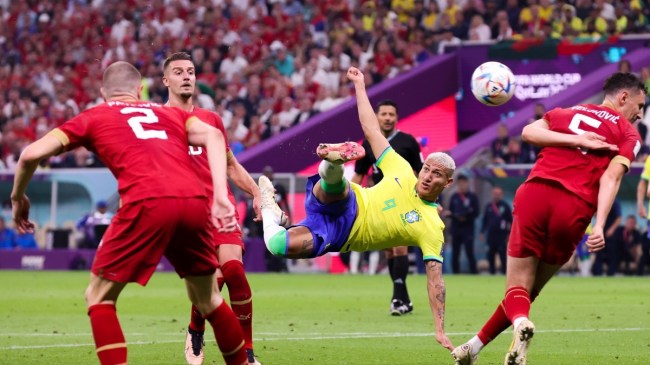 Brazil is synonymous with soccer. The nation has won five World Cups, tied with Italy for the most. It has all-time greats like Pelé, Ronaldo, and Garrincha in its history. And, it’s brought a strong team to the 2022 FIFA World Cup that entered the tournament as favorites.

Brazil is known for the flair that they play with, too, channeling the dance, the samba, that was developed there. The sport is even referred to as “Jogo Bonito” the beautiful game, in the South American country.

In their World Cup opener against Serbia, they showed why they are so beloved from around the world.

With Brazil up 1-0 on a Richarlison tap-in, the Everton man converted a ridiculous goal where he popped up the ball to himself and scissor-kicked it in.

ARE YOU SERIOUS RICHARLISON?! 😱😱🇧🇷 pic.twitter.com/FQX0f45byh

My goodness, what a goal. That first touch was not intended to be popped up like that. But, it makes the goal much cooler. It put his nation up 2-0, and they cruised home to a win by the same score.

The reactions to the goal were immediate.

RICHARLISON WHAT A GOAL! pic.twitter.com/cz7Zk8byz0

That HAS to be the goal of the tournament so far.

That's why its called the Beautiful Game

Goal of the year from Richarlson right there. Holy smokes

Brazil will be back in action Monday against Switzerland.