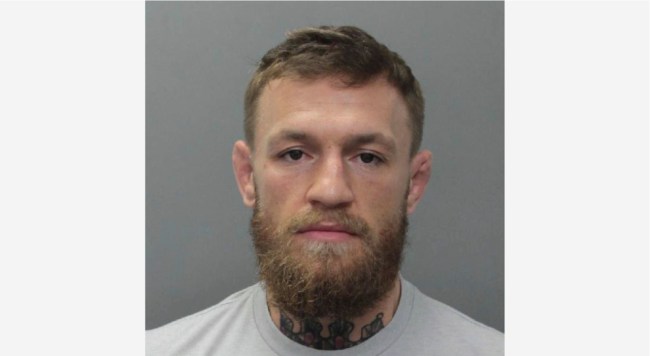 Conor McGregor is one of the scariest men when inside an MMA Octagon, but the former UFC champ let down his guard today while in Miami Beach, getting aggressive with a fan and, ultimately, being arrested after smashing the person’s phone. That’s according to the Miami Herald, who first reported the news.

The Miami Herald piece reports that the incident occurred outside of the Fontainebleau Miami Beach hotel, with the rest of the report saying that Conor McGregor was walking out of the resort and home to LIV nightclub around 5 a.m., and, when a fan tried taking a picture on his cell phone of the MMA star, McGregor “slapped” it out of the fan’s hand, then stomped on it several times. The phone, which was valued at $1,000, was then picked up by Conor McGregor, who walked away with it.

The 30-year-old McGregor was charged with felony strong-armed robbery and misdemeanor criminal mischief, according to Miami Beach police.

The Miami Herald also reported that the incident was captured on surveillance camera, and, while McGregor wasn’t arrested at the scene, detectives spent the day tracking him and found him at a Miami Beach home. No further details were released.

As we know, this isn’t Conor McGregor’s first run in with the law, as the Irishman was arrested last year after attacking a bus full of UFC fighters, where he threw objects through a window, causing injury to a few of them. He eventually plead guilty to a disorderly conduct charge in that incident after initially being charged with two felonies. He was forced to attend three days of anger management courses and do five days of community service. It’ll be interesting to see what kind of punishment McGregor receives here, especially after fleeing the scene of the incident immediately after, so stay tuned for any updates or further details.