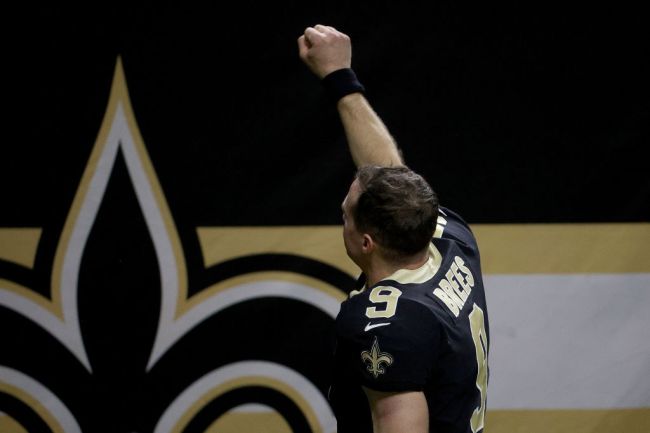 Drew Brees and Tom Brady are headed to Canton when it’s all said and done. The future Hall of Famers faced off in the NFC Divisional round of the playoffs on Sunday for what might be the former’s final time on the field. It is expected that that Brees will retire this offseason and the two took a moment after the game to take the field together one last time.

The man who means so much to the city of New Orleans has not made an announcement about his decision, but it sounds like he has played his last snap in the National Football League. He seemed to pass the reins to Jameis Winston as the clock wound down.

Brees held a 5-2 advantage in head-to-head matchups that date back to college coming into the game, but Brady was the victor on Sunday. Both quarterbacks will leave a lasting legacy on the game and find their names atop the record books in some of the most prominent categories:

The two have had remarkable success in their careers and played to one last classic with a trip to Green Bay for the NFC Championship on the line. Tampa Bay went down in the first quarter but held a lead at halftime that never dissipated, giving the Buccaneers their first playoff win since 2002 by a score of 30-20. There is no way to sugar coat the fact that Brees struggled in his finale and his performance may end up being the driving factor to his return for another season as he chose to do at the end of last year. However, in case that it was his swan song in the Superdome, he took one last look back as he walked into the tunnel. It was a pretty telling visual.

Brees met with the media after the game and returned to the field in his street clothes with his wife and four children to soak up the potential conclusion of his career. Brady joined them in the end zone, threw a touchdown to Brees’ son and said goodbye to an old friend with an embrace after a long chat.

Brees and Brady share a moment after the game. Then Tom throws one last TD…to Drew’s son. pic.twitter.com/qG1pJ1o2oW

It was more than an hour before Brees and his family left the field. The Super Bowl XLIV champion and New Orleans icon was taking in every last second.

The Brees family still soaking up what could be their final time in the Dome. Having just the best time as a family. Laughing and playing football. What a scene. pic.twitter.com/IIK6zDzc3C

Should Brees choose to retire in the coming weeks, he will be first eligible for the Hall of Fame in 2026 and will receive the famous David Baker knock on first ballot. His play was among the greats and his presence in the Big Easy is beyond explanation.

I cried real tears as Drew Brees left the field tonight. To understand what he and that 2009 Saints team mean to the city of New Orleans can't be put into words, but Wright Thompson does a damn good job of it:https://t.co/6Xr9SoVxSc