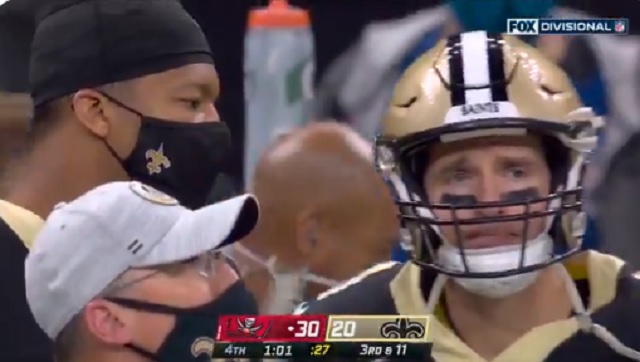 It appears that Drew Brees has played his final NFL game.

Before Sunday’s Bucs-Saints divisional playoff game, Fox Sports’ Jay Glazer reported that Brees was deadset on retiring after this season.

.@JayGlazer says Drew Brees will retire after this season

He says this will be Brees' last game ever in the Superdome pic.twitter.com/R3T4dkWLY1

After the Saints were eliminated by the Bucs a tearful Drew Brees was seen telling Jameis Winston “this is your team now” on the sidelines.

Drew Brees is on camera there, on the verge of tears, pointing at Jameis Winston and saying "This is your team now."

An emotional Brees went on to blow kisses to the Superdome crowd as he made his way to the locker room.

This picture says it all. pic.twitter.com/rxeHR1NQPu

It’s definitely going to be weird to see the Saints without Brees next season after watching him all these years.