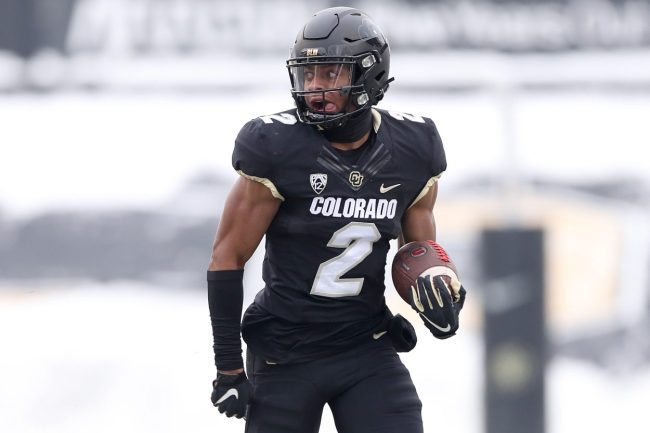 Less than two months into the Lincoln Riley era at USC, everything is turning up gold. The Trojans have brought a lot of talent to Los Angeles since Riley’s arrival and now former Colorado wide receiver Brenden Rice is set to join them.

Rice, the son of NFL Hall of Famer Jerry Rice, is bigger than his dad in size and is faster than his father in terms of 40-yard dash speed. He is a weapon in both the passing game and on special teams and will be an immediate impact player at USC.

Although he finished second to tight end Brady Russell for the team lead in catches and touchdowns with the Buffaloes last season, he was not utilized as much as he deserves. In two years with Colorado, Rice caught 27 balls for 419 yards and five touchdowns.

At 6-foot-3, 205 pounds, Brenden is one inch taller and five pounds heavier than Jerry during his playing days. In addition, he has been recorded under a 4.7-second 40-yard dash, while his dad ran a 4.71.

Regardless of the times, both of them are faster in-game than their number indicate.

After receiving a punt at his own 20-yard-line, Rice broke an 80-yard run right through the heart of the Utes defense and scored. He also put a nasty move on the punter, even though he probably didn’t need to.

TOUCHDOWN 🙌@BrendenRice takes the punt ALL 👏 THE 👏 WAY 👏

Later that game, he became the first Colorado player to record a receiving touchdown and punt return touchdown in a game in the past 25 years. Look at his breakaway speed down the sideline:

In high school, he stiff-armed a cornerback into the shadow realm.

And earlier this year, he made this ridiculous grab over an Oregon defender.

This isn’t to say that he will be better or worse than his father, because eras are simply incomparable and that wouldn’t be fair to Brenden, but his intangibles certainly give him an advantage. The former four-star recruit out of Arizona has a real chance to explode in Los Angeles over the next few years.