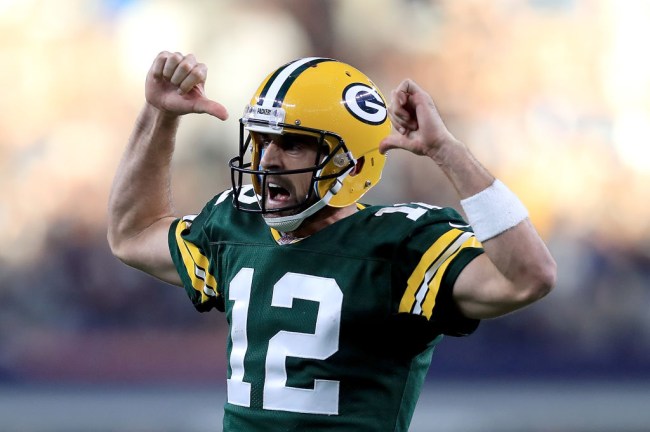 The Packers trading up and selecting quarterback Jordan Love with the 26th overall pick was the biggest shock of the entire 2020 NFL Draft. The Packers could have elected to pick up a weapon for Aaron Rodgers, but instead may have drafted his eventual replacement far earlier than anyone expected.

Green Bay taking Love was a total head-scratcher and since the surprise pick, all of the attention has turned toward Rodgers and what this may mean for his future.

While Rodgers’ current left tackle David Bakhtiari’s initial reaction to the pick was that it was going to motivate his quarterback claiming the rest of the NFL should be put on notice, Brett Favre offered up a bit of a different take about the situation.

Favre, who is speaking from very familiar experience on the matter, thinks that this may have gotten the wheels turning in Rodgers’ head and seems convinced that he’ll eventually leave Green Bay and play for another team before his career is over.

“I think he’ll play somewhere else, Favre said on The Rich Eisen Show. “You know, Tom Brady, myself, Joe Montana and Peyton Manning, just to name a few, finished their career elsewhere. I think you’re going to see that trend more and more and I think Aaron will finish somewhere else, that’s my gut.”

“I guarantee this got the wheels turning in Aaron’s mind. That means that there’s a chip on his shoulder towards the organization that was not there so all he needs is a reason, other than this reason to expedite that.”

FULL CLIP of @BrettFavre saying he thinks @AaronRodgers12 will finish his career in another uniform:#Packers #NFL pic.twitter.com/7hmlV64vrN

Rodgers is under contract through 2023 and with his hefty price tag, it could be difficult to find a suitor for him if Green Bay elects to test the trade market. Father Time isn’t necessarily on his side either as he’ll turn 37-years-old in December.

When the 2020 NFL Draft concluded the Packers did manage to draft running back A.J. Dillon and three offensive linemen in the later rounds, but the fact that the team didn’t draft a single wide receiver in a very deep class could have been the tipping point for Rodgers and his relationship with the organization.