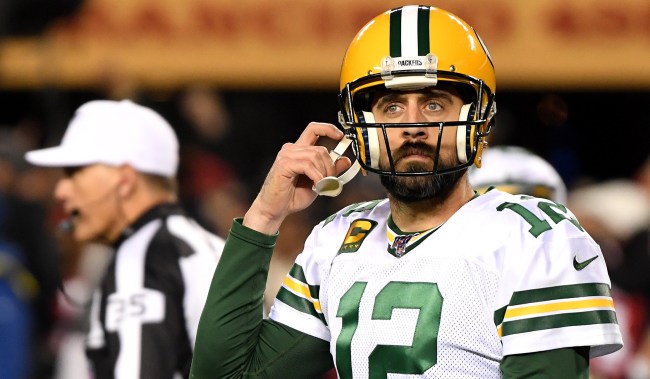 The Packers made the most surprising selection during the first round of the 2020 NFL Draft on Thursday night when they traded up four spots to draft quarterback Jordan Love out of Utah State.

Green Bay picking a quarterback in the later rounds wouldn’t have been all that surprising, but instead of picking up a new weapon for Aaron Rodgers with the 26th overall pick, the Packers may have selected his eventual replacement.

Immediately after the shocker of a pick, everyone’s attention turned to Rodgers as speculation ramped up about how the pick could affect the 36-year-old gunslinger.

Green Bay’s left tackle David Bakhtiari was on a live stream called the ‘Draft-A-Thon Live Show’ with Rich Eisen and company and he appears to have a hunch as to how Rodgers will respond to the Packers drafting a QB so early.

“Let me tell y’all something right now, look out.” Bakhtiari said. “Aaron is about to be on fire. He’s already great when he is just chill, but when I’ve seen him when he gets riled up, woo, it’s getting my hair raised up right now thinking about this.”

#Packers LT David Bakhtiari on Draft-A-Thon about his QB: “Look. Out. Aaron Rodgers is about to be on fire. … I got my hair raised up just thinking about it.” 🔥🔥🔥https://t.co/wJxCD2Clbr

Rodgers isn’t necessarily coming off of a ‘great’ season statistically, but he was able to lead the Pack to the NFC title game nonetheless.

Love fell into that ‘sleeper’ category leading up to the draft and will enter his rookie season in Green Bay after throwing 20 touchdowns and 17 interceptions at Utah State.