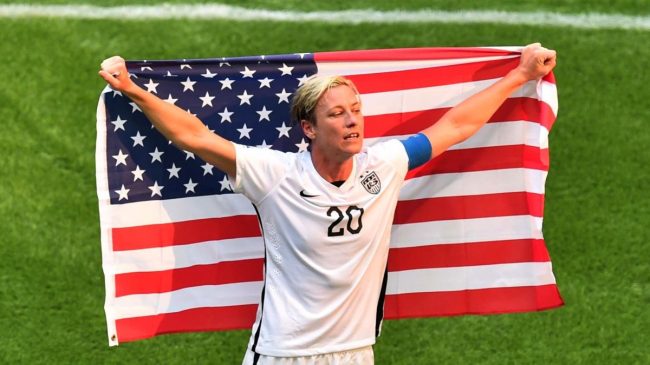 The news seemingly gets worse by the day for disgraced Pro Football Hall of Fame quarterback Brett Favre. Favre was caught in the middle of a scandal involving Mississippi welfare funds that he then redirected to the University of Southern Miss athletic department.

Just yesterday, The Athletic dropped a report that revealed Favre’s charity, Favre 4 Hope, had also spent more than $130,000 on USM athletics over a three-year span. The charity’s stated goal is to “provide services to underserved and disabled children in Mississippi and Wisconsin” as well as “providing financial aid for breast cancer patients.”

Instead, Favre spent the charity’s money on a new volleyball arena at USM. His daughter Breleigh played volleyball for the Golden Eagles from 2017-2019.

Now Favre is set to face another repercussion for his actions. US soccer star Abby Wambach has opted to divest from Favre-backed concussion drug company Odyssey Health.

Abby Wambach told @markfwespn that she intends to fully divest herself from a concussion drug company that is backed by Brett Favre and is at the center of a Mississippi welfare fraud case.

In an email Thursday, Wambach indicated it wasn’t until she was contacted by ESPN earlier in the day that she first became aware of “disturbing information” about Odyssey Health. She said she had supported the company as part of a personal effort to lessen the impact of concussion-related injuries.

“Minutes after learning this new information, I initiated the process to immediately and fully divest myself from any involvement — financial and otherwise — with Prevacus/Odyssey Health Inc., a process that I insisted be complete by end of day today,” Wambach said Thursday.

Wambach is the US’s all-time leading goal-scorer. Her 184 career goals are 26 more than Mia Hamm in second place. Wambach is also remembered for her iconic goal against Brazil in 2011 FIFA Women’s World Cup.

Odyssey Health has since scrubbed any mention of Wambach from its website.