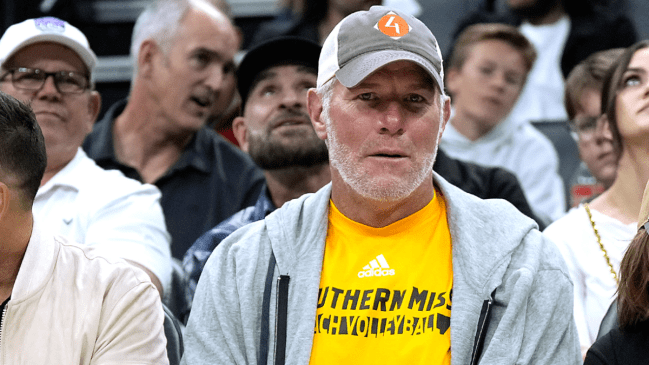 The news just keeps getting worse for disgraced Pro Football Hall of Fame quarterback Brett Favre. Favre has spent recent weeks at the center of a scandal in which he used Mississippi welfare funds to fund a University of Southern Miss volleyball arena.

Now it appears that the scandal may be even worse than it initially appeared.

Katie Strang and Kalyn Kahler of The Athletic took a detailed look at the case and found some much more horrifying than anyone could have expected.

Brett and Deanna Favre founded the Favre 4 Hope charity in 1995. Its stated mission is to support disadvantaged children and cancer patients. Now it appears that Favre has strayed far from that mission.

Strang and Kahler report that the charity donated more than $130,000 to the University of Southern Miss Athletic Foundation from 2018-2020. Those were the same years Favre was reportedly working to fund a new volleyball facility. Favre’s daughter Breleigh played volleyball for the Golden Eagles 2017-2019.

Though Favre’s history of using charitable funds to support his daughter’s endeavors reportedly goes well beyond just her time at Southern Miss.

In the same years Favre was soliciting money to build the volleyball facility, his charitable foundation, which received public donations, significantly increased its contributions to USM’s athletic fundraising arm. Tax records show that Favre 4 Hope gave the USM Athletic Foundation $60,000 in 2018, when no other charity received more than $10,000. The next year, it gave $46,817; the next highest gift, to the Special Olympics of Mississippi, was $11,000. In 2020, Favre 4 Hope sent USM’s Athletic Foundation $26,175; no other organization received more than $10,000.

Tax records also show that in 2015, when Favre’s daughter was a volleyball player at Oak Grove High in Hattiesburg, the Favre 4 Hope foundation donated $60,000 to that school’s booster club, the largest grant made by Favre 4 Hope that year. The Oak Grove Booster Club subsequently granted $60,349 to the high school with the stated purpose being: “assist to build athletic facility.”

Favre has since paid back the $1.1. in welfare funds that he received from the state of Mississippi. But the state claims he still owes over $200,000 in interest. He now may also have to answer to a number of his charity’s donors.