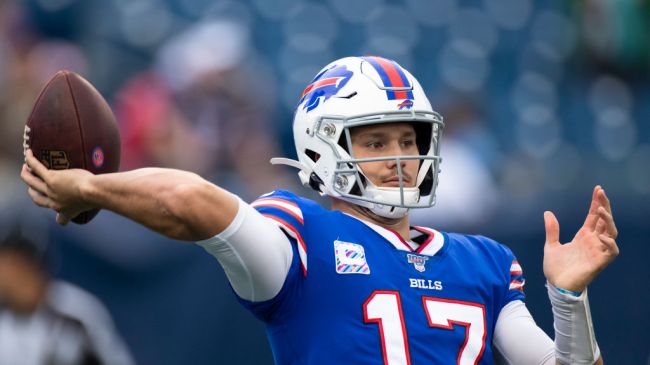 Josh Allen has looked exceptional while leading the Bills to a perfect 4-0 start to begin the NFL season. The third-year quarterback has very clearly taken yet another step in his development this season and has deservedly caught the attention of fans and media outside of Buffalo.

Allen has thrown for 1,326 yards so far this season with 12 touchdowns and just one interception. While the season is still young, he’s also completing 70.9% of his passes, which is quite the uptick after completing 59% of his passes during the 2019 regular season.

Brett Favre joined NFL Radio on SiriusXM to discuss Allen, his improvements, and what his ceiling may be in the long-run. Not only did Favre gas him up as one of the best QB’s in the game right now, he said he believes he’ll be the new Tom Brady.

“For a big guy, he can really move, but more than anything, we saw that with him the last few years, but what we’re seeing now is he’s taking it to the next level. He’s winning games. He’s putting an exclamation point on the game itself, week in and week out. It’s really – I think for Buffalo fans and the organization – what you’ve been waiting to see.

I think Josh Allen will be the new Tom Brady. At some point, he will be running the division.”

"I think Josh Allen will be the new Tom Brady."

Hall of Famer @BrettFavre LOVES what he's seen from @BuffaloBills quarterback @JoshAllenQB through the first four weeks of the season.#GoBills | #BillsMafia pic.twitter.com/VScvMQcGGw

Saying that a 24-year-old, third-year QB will turn into the new Brady is about as high praise as high praise comes, but Allen does seem to be on that type of trajectory.

It’s worth noting that Favre didn’t go full-crazy and say that Allen is going to pick up multiple Super Bowl rings over the next couple of seasons, only that he’s going to be dominating the AFC East for years to come, just as Brady did during his days in New England.