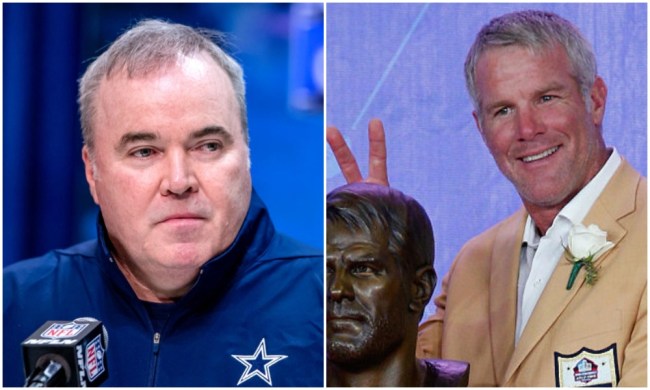 It’s been a less than ideal start for Mike McCarthy in Dallas. The Cowboys are dealing with major injuries all over the field, anonymous players have thrown him and his staff under the bus, and to make matters worse Dallas is just 2-5 on the year in the worst division in all of football.

While you can’t just gloss over the fact that Dak Prescott is out for the year and the offensive line has suffered a number of injuries already this season, McCarthy does not find himself in a great situation at the moment.

As for what exactly is going on with McCarthy, his coaching style seemingly not working, and perhaps losing the locker room, Brett Favre, who played for McCarthy in Green Bay, offered up his thoughts.

“I’m a little bit baffled because Mike’s pretty good at handling players and dealing with issues,” Favre said on SiriusXM NFL Radio. “Is he perfect? No one is. I think maybe, part of the problem is he’s pretty stubborn and strong-minded and a disciplinarian, but not in a way, it’s not like going to the principal. He’s just got that tough Pittsburgh mentality, which is where he’s from.”

“Maybe the group of guys that they have, the core group that you count on, maybe are not guys that take coaching very well. I don’t know. There’s something missing there.”

Favre calling McCarthy stubborn isn’t necessarily a bad thing, he spent a lot of time around him and his coaching style clearly worked well in Green Bay. The real takeaway, and probably the root of the issues, is the core group of players that Favre mentions perhaps not being all that coachable.

Whatever the case may be, the Cowboys seem to be going down a terrible path at the moment and if they can’t get back to their winning ways against the Eagles on Sunday it’s going to get much, much worse.