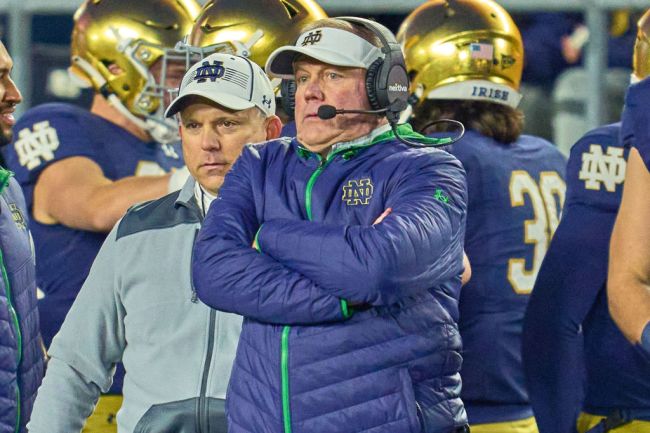 There’s a good chance no one shows up to Brian Kelly’s early morning team meeting on Tuesday.

On Monday night, it was revealed that Kelly would leave Notre Dame for LSU, where he will be paid $15 million/year to become the Tigers’ next head coach.

After news broke of his departure, Kelly sent a text to Notre Dame players and told them he would talk to them in person at a 7 am team meeting.

The plan is for Kelly to meet with the team tomorrow at 7 a.m.

Here is the full message pic.twitter.com/sqAl2txZIy

College football fans had some hilarious reactions to Kelly scheduling a 7 am team meeting to say goodbye to tell players that he’s ditching.

Left them in the middle of a playoff run and than calls a 7am meeting. Come on son. https://t.co/PjKqHPhOW1

Brian Kelly is a monster. Not for leaving, but for scheduling a 7am meeting. pic.twitter.com/WwYSagP8cL

Brian Kelly at that 7am meeting pic.twitter.com/Oggh7mEuoV

lol Brian Kelly called/is still scheduling a 7 AM meeting to tell his team that he just jumped ship while they’re in the middle of the season and still have a chance to win a national title.

REALLY hope nobody shows up to that shit. Sleep through that alarm, dudes. https://t.co/DFJpxzUnl1

What's worse, being broke up with over text or a mandatory meeting with your ex at 7am for them to explain? https://t.co/Y6DafcsU3M

Brian Kelly at 7am tomorrow pic.twitter.com/GaD1Uu3P0O

Ain’t no way I’m coming to the 7am meeting. https://t.co/B5POVVQjzf

When the coach calls a 7AM meeting to tell you he is leaving https://t.co/6U9IPRqZ04 pic.twitter.com/o84w4ImsWY