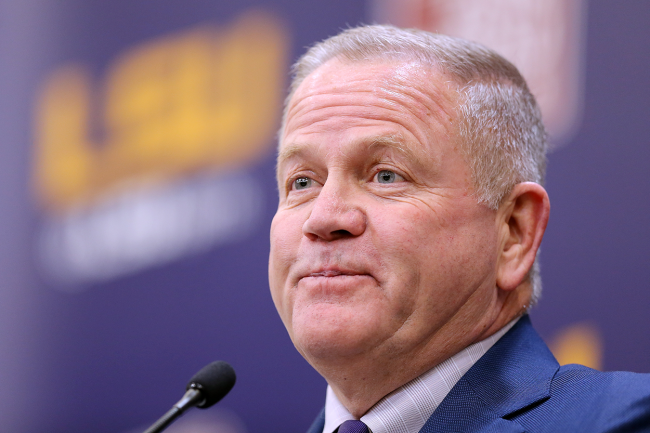 Brian Kelly was introduced as the head football coach at Louisiana State University on December 1, 2021. On Wednesday, he spoke to the media for the first time since his introduction three months ago.

However, the press conference was scheduled for 12:00pm CT and Kelly arrived five minutes late. He said that his late arrival had to do with parking.

If you know anything about college campuses, parking is an absolute nightmare. Every single lot is marked off with only certain people allowed to park in each lot.

To obtain a parking pass requires paying up for the right to park on campus and often includes a lengthy waiting list. In some instances, there are a list of requirements that are necessary to get a parking pass. Whether it be academic standing, last name, or the amount of library books that are overdue, it’s usually a pretty demanding process.

Should you not be so lucky as to obtain a parking pass, finding spots on campus are nearly impossible. There is no way to park for classes and the visitor spots are for, well, visitors.

As it would turn out, the strict parking rules also apply to the head football coach. Kelly showed up late on Wednesday and immediately claimed parking.

According to Kelly, even after three months in Baton Rouge, he doesn’t have the right parking pass.

Brian Kelly speaking to the media. Says he was five minutes late because he still doesn't have the right credential to park out front.

Even if Kelly isn’t telling the truth (he is), he picked the most believable excuse possible so no one is going to question him.