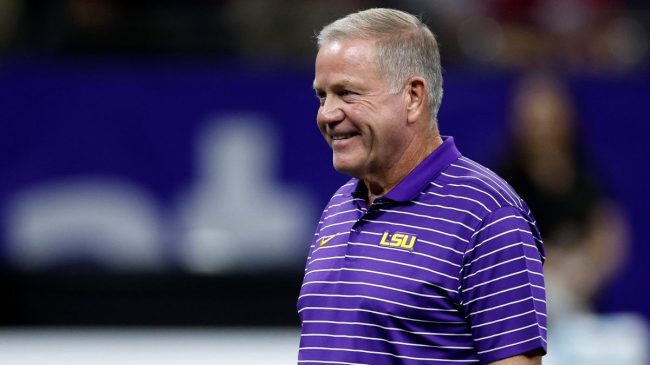 Okay, so we’re all aware of that reporter who blasted Brian Kelly in his press conference after Week 1, right? Well, during that presser, the LSU head coach implemented a $10 rule for anyone who showed up late. Now, a week later, it appears Kelly has dunked on himself.

According to Unnecessary Roughness, the Tigers’ head coach arrived late for his press conference. All of the media members made sure to be on time, as LSU was victorious in Week 2. However, the tables were turned on Brian Kelly as he arrived late and was forced to pay $10 towards the rule he made up for the media.

Brian Kelly was late for todays presser so he paid a $10 fine. A rule he put in last week.

All of the reporters showed up on time because they won this week. pic.twitter.com/FU9HwDKC0z

Hey, at least Kelly has a sense of humor about it all. He got blasted by one reporter after LSU’s gut-wrenching Week 1 loss. He seemed rather upset that some media members showed up late and went out of his way to make a $10 rule. Instead, it backfired in his face but it seems the room was lighthearted about it all.

We’ll see if LSU can maintain a winning streak and get back on track. They have a long ways to go though, as Brian Kelly is still building his scheme for the future. Either way, the Tigers could be a solid program moving forward. Now, let’s just make sure everyone shows up on time for the press conferences.