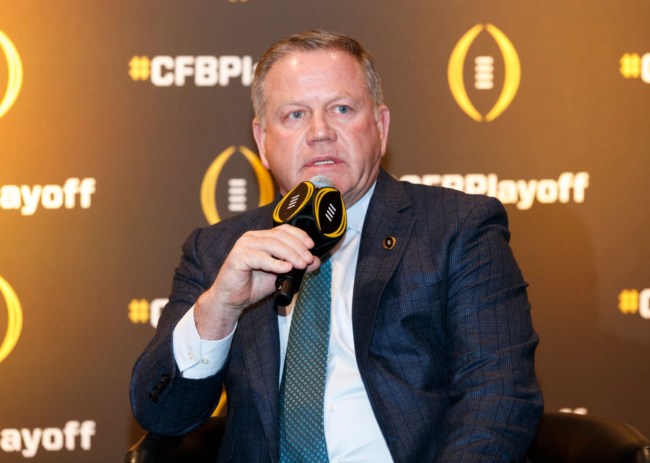 Things move quickly in the college football coaching world, especially among some of the biggest programs in the sport, and Brian Kelly can absolutely attest to that after leaving Notre Dame for LSU.

LSU swung and missed on its top target in Lincoln Riley, who ultimately left Oklahoma for USC. Billy Napier was presumed to be on LSU’s wanted list as well, but he left Louisiana for Florida. Then, you have Jimbo Fisher, who stayed put in Texas A&M. All of a sudden, LSU blinked and it was running out of time to hire a big-name coach, which is something the program absolutely had to do. LSU didn’t buy out Ed Orgeron to hire some under the radar, up and comer.

So, the Tigers swung for the fences and hit a home run – at least on paper – with Kelly.

The Kelly to LSU deal felt like it came out of nowhere because it pretty much did come out of nowhere. Kelly himself even seemed to be surprised that the deal solidified itself like it did, as he told Dan Patrick on Wednesday morning.

Kelly shared a bit of a timeline between being Notre Dame’s head coach and becoming LSU’s, and things escalated quickly.

He explains that he was out in Los Angeles recruiting on behalf of Notre Dame while the LSU deal was seemingly taking shape behind the scenes. He then jumped back on a plane, which was probably Notre Dame’s plane, and that’s when he found out he was going to be the next head coach at LSU.

Kelly also revealed that the only two people on the plane were himself and his attorney, which is definitely an indicator that things with LSU were moving in a major way.

Brian Kelly told us that he was recruiting in LA as #NotreDame Head Coach, and on his way back to South Bend he found out that the deal with #LSU was solidified…#GeauxTigers #FightingIrish pic.twitter.com/xXJpjvmeuU