Brian Urlacher Is No Longer Bald, And I Have So Many Questions After Seeing The Pics 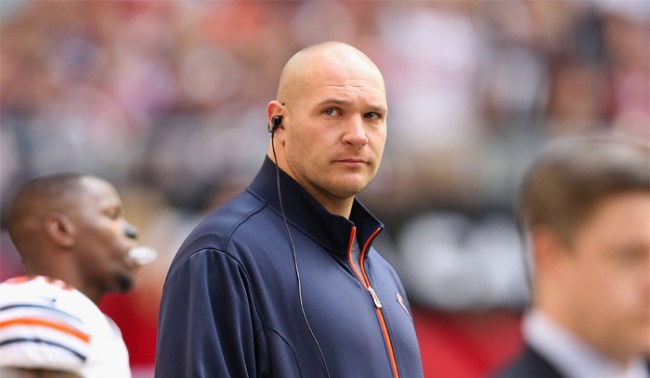 For as long as anyone can remember, former Chicago Bears future Hall of Famer Brian Urlacher has had a hell of a lot of shine coming off of his bald dome. And when I say that, I mean no fan has really seen him with anything that even resembles peach fuzz on his head.

Oh, but that has all changed—and in a MAJOR way.

Appearing on Chicago’s WGN this morning, the eight-time Pro Bowler had a different look to him, one that might make George Costanza really proud.

The biggest question, besides why in the hell he had some restoration done now that he’s no longer in the spotlight, is how did he get this salad to grow so fast? Just a few months ago they guy was still full Lauer.

As shocking as this may be, there were some who have disputed Brian Urlacher even being bald in the first place, as Paul Pabst of the Dan Patrick Show tweeted after seeing the reaction of Urlacher’s, um, lettuce.

We had Urlacher on a few years back and he said that he's not bald and chose to keep it tight/shaved out of convenience. Wild.

However, while posing following the segment, it seems Urlacher waved the white flag and put any dispute to rest, admitting that his “flowing” locks were a byproduct of some serious help.

Just had a nice chat with @wgntv to show off my new look. Thanks to the team at @RestoreByKatona for the new hair! pic.twitter.com/mNHejP43TT

This might be the most ridiculous thing you’ll see today, but, rest-assured, Urlacher and Costanza can now enjoy a nice meal and chum it up with their new rugs at Monk’s together—while people embarrassingly stare at them both.

I’m having a tough time deciding who wears that dead animal better.