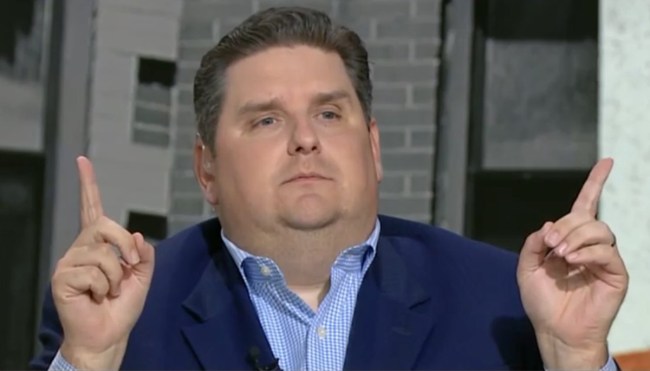 Over the past few years, Shams Charania has given Adrian Wojnarowski one hell of a run for his money as the two men have engaged in a constant battle for Breaking NBA News Supremacy.

Both insiders did what they do best when the league’s free agency period officially kicked off at the end of June, but in a fairly unlikely twist, they ultimately took a backseat to another reporter who managed to upstage them shortly after the action got underway: Brian Windhorst.

Windhorst appeared on First Take last Friday and put on an absolute clinic (in addition to spawning a hot new meme) when he commandeered a segment concerning Kevin Durant’s trade request to cryptically call attention to a move the Jazz had made while advising viewers to keep an eye on Utah.

Brian Windhorst just ran the First Take desk in circles. They were hanging on his every word for 2+ minutes 😂😂. Absolute masterclass. pic.twitter.com/Q1vn6mD9iz

It didn’t take long for the world to learn Windhorst was onto something after Rudy Gobert was traded to the Timberwolves in one of the biggest deals of the offseason—a transaction the reporter apparently knew was in the works when he went on air.

Windhorst addressed the viral clip during a recent chat on The Hoop Collective podcast where he revealed the reason he was so cagey in the first place.

Windy blamed his need to be cryptic during viral Utah Jazz video on aggregators pic.twitter.com/qHOaYDcxAw

“Look, I knew the Jazz were pretty close to trading Rudy Gobert. To be honest with you, part of what I was doing was trying to avoid aggregation.

Because if I come out and go ‘I think the Jazz are going to trade Rudy Gobert today,’ then everything on the internet is ‘Windhorst Report: Jazz trade Gobert.’ And then maybe they don’t trade him.

I have to say that his decision to do what he did does seem wildly unnecessary based on that explanation, but I think we can all agree the world is a better place because he went down the path that he did.