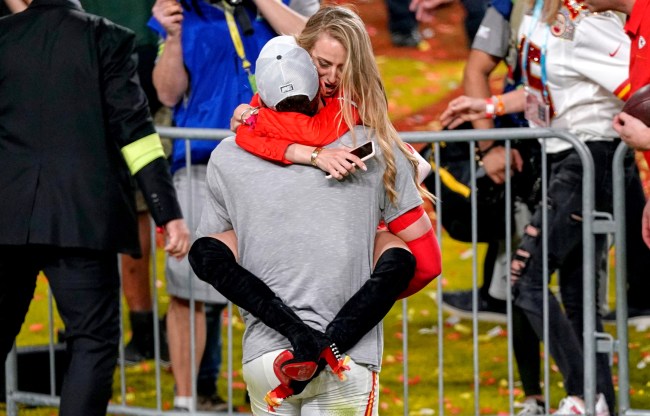 Patrick Mahomes’ fiancée Brittany Matthews says she doesn’t understand nor like it when sports fans compare players to one another.

Seriously. This is something she said. That sports fans should not compare players to other players.

And she wonders why people are mean to her on social media.

This is the same person who tweeted, “All patriots fans ‘we still have 6 Super Bowls’ Lololol Once patrick has been in the league as long as Brady, then chat to me about Super Bowls! Patrick is 24, brady is 42 you just wait.”

Oh, wait, she later deleted that. So it’s all good then I guess.

As for why fans compare players to one another, well… there is this whole thing called statistics. You may have heard of it. It’s how each sports league keeps track of which players are doing the best each season. It’s also how things like each league’s MVP is chosen, who makes the All Star games, who gets elected to the Hall of Fame, if and when a player gets drafted, and even helps decide whether one player gets to play more than another at a given position on a team.

It’s kind of important to compare players to each other.

Also, each team’s ownership and management uses those statistics to compare the players to see how much each one of them should be paid – something that certainly came in extremely handy when her fiance Patrick was negotiating his latest contract with the Kansas City Chiefs.

Patrick Mahomes Surprises His Fiance With A New Lamborghinihttps://t.co/FZOOdJKxnA

So yeah, that’s one, of many, many reasons why sports fans like to compare players to one another.

One day, y’all will learn, to stop comparing people🤷🏼‍♀️

No, actually, we won’t. Sorry?