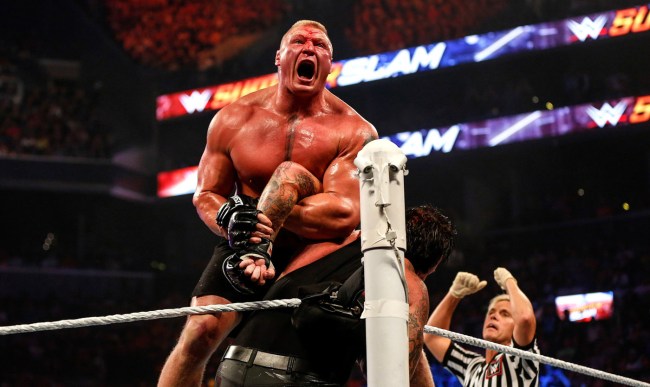 How appropriate is this? The Beast Incarnate’s offspring is going to be a Sun Devil. That’s right. WWE behemoth Brock Lesnar’s daughter Mya Lesnar has signed to compete in track and field for the Arizona State Sun Devils.

Just like her famous dad was, Mya Lesnar is one of the best high school athletes in her state. In fact, she might even be better in her chosen athletic field than Brock was at the same age.

Brock, the 2000 NCAA Heavyweight Champion in wrestling, only placed third in the state championships his senior year of high school.

Mya, on the other hand, recently won the Minnesota high school state championship for the shot put and is the ranked sixth in the nation for her age.

No word on whether she can deliver a devastating F5 yet, however.

Mya Lesnar is a Minnesota state champion, the sixth-best shot-putter in the country and a future Sun Devil!

Oh yeah, one of Lesnar’s son and Mya’s twin brother, Luke – who refers to himself as The Beast 2.0 – is also a three-time Minnesota state champion in wrestling and is supposedly going to be joining the WWE at some point in the future.

“I’m currently wrestling in high school, entering my senior year. Three-time Minnesota state champion. I have thought about college but school isn’t really for me. I pretty much know what I want to do aside from wrestling,” Luke told Ride the Wave media. “There’s a 70% chance I’ll be going to OVW. Other than that, I really want to be trained by Shelton Benjamin (his dad’s former college roommate).”