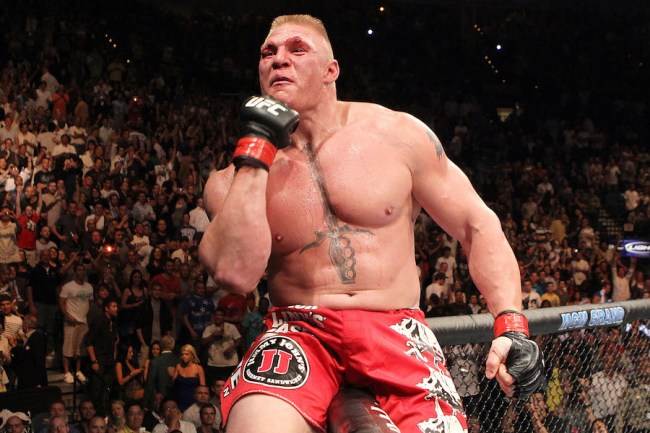 Brock Lesnar’s contract with the WWE expired in April and the former world champion isn’t rushing back to the wrestling ring, or octagon, any time soon.

Just because Lesnar is temporarily retired, that doesn’t mean former fighters and grapplers aren’t still taking shots at the star.

On a recent episode of Submission Radio, former UFC light heavyweight champion Vitor Belfort was the first to challenge Lesnar to a fight. The 43-year-old MMA star went so far as to call Lesnar’s MMA career a fraud.

Belfort previously competed for the UFC, where he fought in the Heavyweight, Light Heavyweight, and Middleweight divisions. He’s currently signed with ONE Championship and is still in insane shape.

Belfort has a solid reason for calling Lesnar a fraud, which boils down to the former NCAA all-American not putting in the work to earn his title shots.

Here’s a transcript courtesy of 411 Mania:

“Fraud because he never paved the way, man. He never fought MMA. He went there and he got a chance. He fought for the belt after one fight.

An MMA fighter can never cross to football. They can never cross. Michael Jordan tried to cross from baseball and he couldn’t make it. Why? Because you have a process to make it. So, that’s what it is. We need to understand that MMA, a combat sport.

Even YouTubers can fight. Even like if you’re a hockey player you can come and fight in these rules. That’s why it’s good, man, that’s what makes MMA so possible.

You don’t need to have a career, you can make a career and you can become a persona and people can like you and they can buy you.

Belfort called out Lesnar later in the interview and even found time to call Lesnar…an elephant?

We put the gloves, we go combat, you know? I know you’re a very tough man. I heard you’re a grappler, but I’ll fight you, man. I’ll fight you any day, any time, and I think that’s a legendary fight right there.

But I think he’s a fraud in MMA. But, you know, he comes from WWE, he knows how to sell, but for MMA, he doesn’t like to get hit.

The king of the jungle is the Lion, not the Elephant. So, Brock Lesnar, you’re right down my alley, my friend.”

Lesnar is an elephant I wouldn’t want to piss off.

Belfort said he wants Lesnar, all he needs is some time to train, like 4 weeks. Maybe six weeks. How about a year?