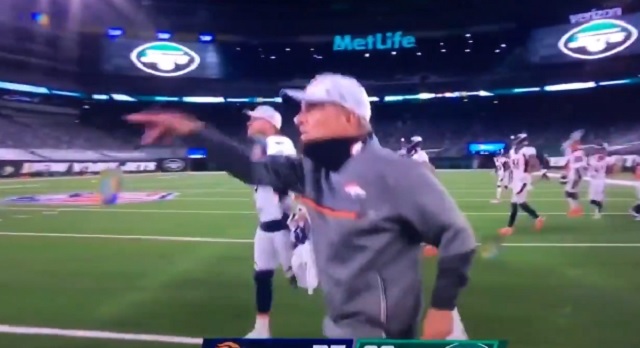 There seemed to be some bad blood between Broncos head coach Vic Fangio and Adam Gase.

With the game already decided, Gase decided to use up all his timeouts to extend the game.

After the game was over, Fangio directed his team to the locker room and snubbed Gase in the process.

Vic Fangio is having none of that bush league BS, tells team to go straight to locker room. pic.twitter.com/pjz2ACY0Cn

NFL fans went on to blast Gase for his late-game antics.

I'm not a Jets fan but Adam Gase should be fired alone for that bullshit at the end of the game. Thats just terrible to take timeouts and have your defense go head hunting when you've got no chance to win the game. Not only is he a terrible coach but he's a terrible person.

Adam Gase is a sore loser. Calling timeouts and telling your players to hit the opposing quarterback when you've already lost? What a piece of shit move.#FireGase and y'know what? Fire Gregg Williams too. That guy should've never been allowed back into the league. https://t.co/EFy4oXylXu

There are many things I'd want to fire Adam Gase for, but calling timeouts when you can't win the game just to prolong the game, only for your defense to take more penalties, is probably near the top of that list.

Adam Gase is an absolute b-hole. Calling timeouts when down twice possessions when your opponent is kneeling? Then taking cheap shots on Rypien. Fangio was right to be pissed.