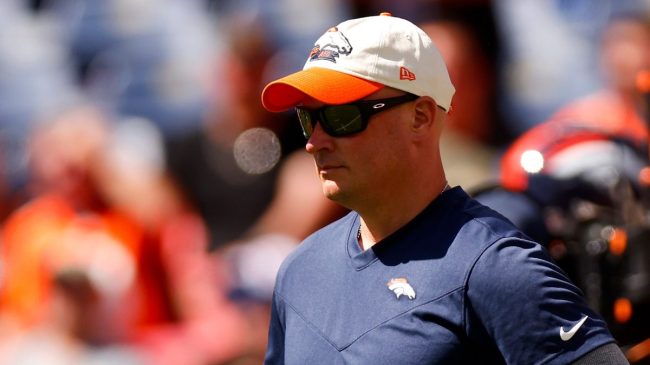 The Denver Broncos are in a heated battle against the Houston Texans as the franchise hopes to earn its first win of the season. However, the offense has looked largely abysmal so far and many are blaming new head coach Nathaniel Hackett. The decision-making has been so bad, that many are questioning the coaching situation in Denver.

The hype was real when Hackett first signed with the Broncos. He was an amazing offensive coordinator for the Green Bay Packers. Pairing him up with Russell Wilson had fans elated for the 2022 season. However, with two games under his belt, the NFL world isn’t so sure he’s the man for the job.

has a coach ever been fired mid-game? asking for Nathaniel Hackett

We’re only two games in and there is plenty of time to improve, but it hasn’t been pretty.

Hackett wouldn’t let the kicker kick a 59 yd fg in Denver, but a 64 yarder in Seattle. That’s the play?

It’s not a great sign when the Broncos head coach can’t even do the basics.

This coaching is TERRIBLE. I understand it’s Hackett’s first year, but these are things anyone could do. RE a punt returner on the field for a punt.

This reminds us of the Tennessee Titans offensive coordinator doing something similar in Week 1.

On 3rd & 1, the Broncos just attempted to run an option with FB/TE Andrew Beck after he took a handoff from Russell Wilson.

It came up short.

The Broncos then took a delay of game on a field goal attempt, thus forcing them to instead punt.

At the end of the day, the Broncos have time to make the proper adjustments. With a veteran leader like Russell Wilson, you’d think Denver can get things back under control sooner, rather than later. However, the fans attending the game on Sunday think Nathaniel Hackett needs all of the help he can get.

Broncos fans are helpfully/mockingly shouting out the play clock on every play as Denver struggles to manage the clock. pic.twitter.com/53p339HGME

We’ll see how the remainder of the season plays out but right now, things aren’t looking good for the first-year head coach.