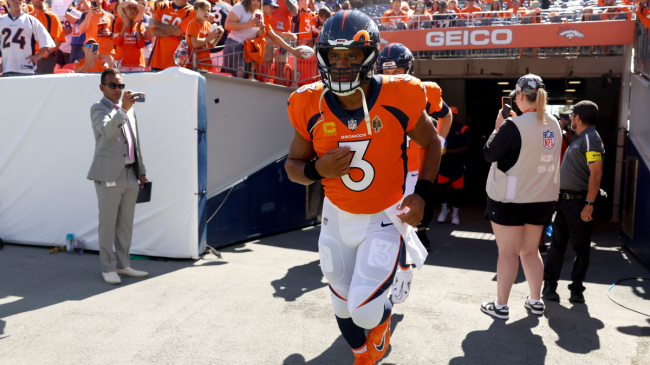 Russell Wilson’s start in Denver is not going according to plan. The passer, who was acquired by the Broncos over the offseason, is struggling in his second start with the team.

In Week 1, we saw the Broncos fall to Wilson’s former team, losing 17-16 to the Seahawks. While that loss can be attributed to a variety of things, including two goal line fumbles, the quarterback often bears the brunt of the criticism.

And with it being Wilson’s first trip to Seattle since his trade, there were a number of former fans and teammates taking shots at the passer on social media.

That noise has far from subsided following a putrid first half showing against Houston in Week 2.

Wilson went just 6-19 in the first 30 minutes of action, throwing for just 93 yards and being held out of the endzone. He then threw an interception on his first drive of the second half.

The Broncos entered the halftime break in a 6-6 deadlock with a Texans team that has gone just 8-25 over the last two seasons.

Fans have not been happy with the performance, and they’re letting it be known online.

Fans blast Russell Wilson for first half performance vs Texans

Fans and media have been quick to post their reactions to Russell Wilson’s awful first half showing against the Texans. Take a look at the immediate social media reaction below.

Former teammate Richard Sherman, who was critical of Wilson’s play last weekend versus Seattle, voiced his opinion once again. It’s safe to say he’s not as high on Denver’s addition of the signal caller as many others were this offseason.

This Denver supporter heard boos hailing from the Broncos faithful, saying, “The Russell Wilson led offense could not make it to halftime of their first home game without being booed by the home crowd.” A few others noted the boos, too, which Wilson has now heard in each of his first two starts with the team.

The Russell Wilson led offense could not make it to half time of their first home game without being booed by the home crowd. #BroncosCountry

It’s safe to say Russ is far from cooking in Denver following this terrible start.

The Broncos will hope to shore up the offensive issues and find some production over the second half of play. If the Broncos begin the season 0-2 with losses to a pair of teams that many believe will finish near the bottom of the NFL, criticism of Wilson will only grow.