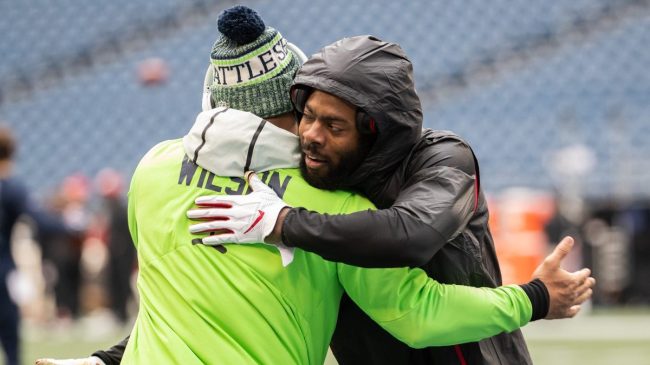 Russell Wilson and Richard Sherman were once the two faces of a Super Bowl-winning Seattle Seahawks team. They defined an era that was one of the most successful in the team’s history. And they were two of the most recognizable players in the league.

Though that eventually began to fall apart.

Sherman was released by the Seahawks in 2019 and joined NFC West division rivals San Francisco. While Wilson continued on with the organization before being traded to the Denver Broncos in this summer.

Though Wilson and Sherman were teammates, it doesn’t appear the two were ever particularly close off the field. Sherman wasted no time taking shots at his former QB after joining the 49ers.

Reporter to #49ers CB Richard Sherman: You’ve seen through the years what Russell (Wilson) is capable of.
Sherman: "Yeah, I’ve also seen him throw 5 picks in a game so you see what he’s capable of on both sides of it. You understand that he can be defended."

Now it appears he’s back at it.

The Seahawks, without Wilson or Sherman, downed the Broncos 17-16 on Monday Night Football in week one. Much of the focus is on Denver head coach Nathaniel Hackett after the game.

But Sherman is pointing the finger somewhere else.

He is adjusting to his personnel…. https://t.co/fChqB0VVFE

Denver went 0-2 in the red zone against the Broncos and fumbled twice on the goal line. Former NFL safety Will Blackmon had questions about Hackett’s play calling. But Sherman seems to imply that Wilson’s limitations led to the curious decision-making.

Something tells us Wilson won’t be invited to any Sherman family cookouts anytime soon.

Wilson finished the game 29-of-42 for 340 yards and a touchdown. But the red zone struggles ultimately proved Denver’s undoing.

Meanwhile, Seahawks quarterback Geno Smith stole the show. Smith threw for just 195 yards. But he completed 23-of-28 passes and notched two touchdowns in the victory.

He also offered up a little something after the game for those fans who had written him off.