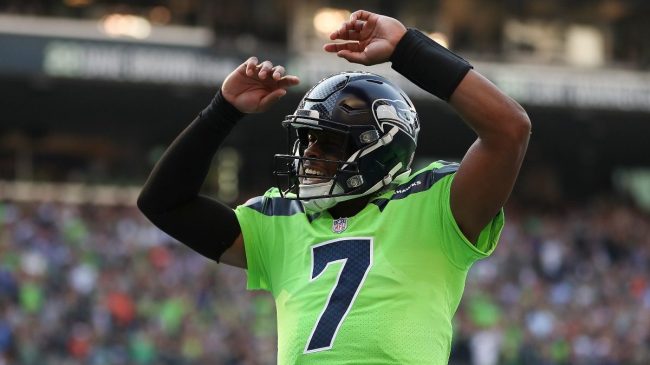 The Seattle Seahawks played surprisingly well in the season opener as they stunned the Denver Broncos. Geno Smith led the way and helped his team prevent Russell Wilson from seeking a win in a revenge game. Regardless, the veteran quarterback might have shown a little too much excitement, as he went full Key & Peele with one of his teammates.

After kneeling it to conclude the contest, Geno Smith turns around and celebrates with his teammate Marquise Goodwin. They dap up like normal, but then things take a turn when Smith clearly grabs Goodwin’s ass. Sure it was subtle, but it was noticeable enough for us to not think of that famous “Slap Ass” episode of Key & Peele.

Remember that episode? Where the baseball team has an intervention with one of their teammates for being too excited about slapping everyone’s ass? That was basically Geno Smith on Monday night. The Seahawks probably didn’t have to give him an intervention, but it is still a hilarious comparison.

At the end of the day, this was a massive victory for the Seahawks. The fanbase clearly moved on from Russell Wilson as they poured on the boos throughout the contest. Geno Smith played extremely well against a solid Broncos defense. We’ll see if he can keep this level of play up throughout the season, as Seattle would largely benefit from great quarterback play.

With that in mind, keep an eye on the Seahawks for the remainder of the season. Week 1 of the NFL is typically a bit chaotic. However, if Geno Smith comes out of the wood works and continues to play as he did on Monday, then Seattle could be a surprise team in the NFC West.