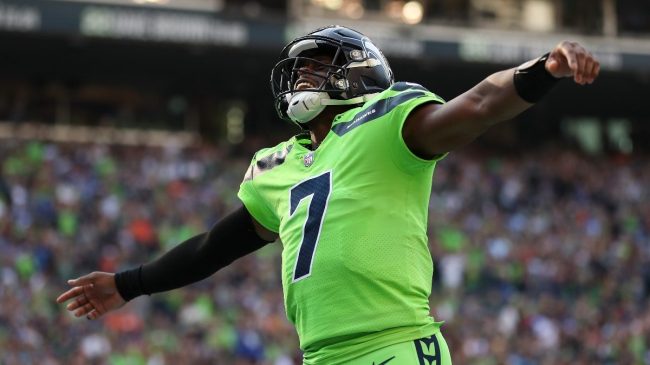 The Seattle Seahawks are taking on the Denver Broncos in the first Monday Night Football matchup. Surprisingly enough, Geno Smith has looked phenomenal so far while Russell Wilson receives continuous, and uncalled for, boos. However, the NFL world lost its mind after Smith got off to a hot start to begin the game.

Even Peyton and Eli Manning were pleasently surprised by Geno Smith’s touchdown. The two NFL legends were just as dumbfounded by Smith’s amazing play on the opening drive as we were. He’s looked great for the Seahawks so far and everyone is freaking out about it.

"I taught him that!"

Pat McAfee explains his reaction to Geno Smith with a subtle GIF.

Even the Seahawks social media team was taken aback by that touchdown.

THAT WAS QUICK! WE ARE ON THE BOARD! @GenoSmith3 ➡️ @Will_Diss

He got that dawg in him.

Yeah. What’s going on with Denver?

Geno Smith is a perfect 7/7 in the first
The Broncos haven’t used a WR yet.

Two sentences I never thought I would say after 15.

Are we in the Twilight Zone?

We’ll see how the rest of this game plays out. The Seahawks were able to maintain a lead entering the second quarter, as they’re up 7-3. If Geno Smith keeps playing like this though, the NFL world is going to go absolutely bonkers.